When Are We Going To Get It? 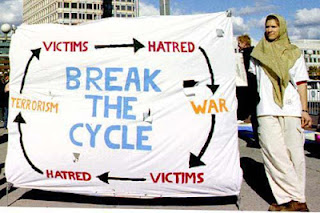 There is a very old saying that “all’s fair in love and war.”  It comes from the 16th century, attributed to John Lyly, an English poet and playwright, who wrote: “The rules of fair play do not apply in love and war.”

Although we quote it, somehow, we in the Western world seem to think that there should be some fairness in warfare and that we should be deserving of that fairness.

The recent case of the British soldier killed in the streets of London is an example.1  There has been an outpouring of emotion and grief.  Rightfully so, we all must grieve for our dead.  But amongst the outpouring has been a cry that “it’s not fair.”  Not fair?  This man was a soldier, he was a fighter in a war in Afghanistan.  Do we (in the Western nations) seriously believe that a war in which we are engaged is going to stop at the borders of the countries we are fighting in?  Do we think, as in many children’s games, that when we reach “home base” we are immune from any further attack?  Such thinking is nonsense.

If we fight in wars, then we must accept that those we fight against are not going to play by the rules of fairness.  And, it must be admitted, when it comes to war, nor do we.

Another saying that comes to mind is that coined by Senator Hiram Warren Johnson in 1918: “The first casualty when war comes is truth.”  The second casualty, I propose, is innocence.  There is no such thing as an innocent party when it comes to war.

If we engage in warfare, no matter whether we are a private soldier, a Brigadier General or a nation state, none of us are innocent.  We continue to perpetuate the cycle of violence.  We contribute to senses of injustice (in ourselves as much as in those we fight against).

No combatant can step back from warfare and claim to be innocent of contributing to death and destruction.  None can claim innocence in perpetuating violence.

When are we going to realise that war is not fair, that no-one is innocent?  When will we understand that participation in war only perpetuates the myth that violence solves problems?

When are we going to realise that war has no borders?  It has no geographical borders and it has no borders in our own psyches.  We cannot claim to be fighting in a war over there but not in here.

Ceasing war is not merely a case of calling a halt to hostilities.  If we truly want to halt the cycle of violence then the best place to start is at the point on the circle that we occupy.  We must come to an honest realisation that it is ourselves that we must change (and can change), not the other.

1. On 22 May 2013 a British soldier was killed near his barracks in London.  The accused said that it was in retaliation for British soldiers killing Muslims.
Posted by bruce meder at 14:06

Email ThisBlogThis!Share to TwitterShare to FacebookShare to Pinterest
Labels: Anti-War, Values and attitudes