HOPE: Moments of inspiration in a challenging world. (Book review) 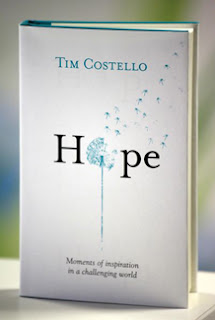 Tim Costello loves stories, he always has.  As a child he loved to listen to his mother and grandmother tell him stories.  In this delightful book Tim becomes storyteller, sharing with us around 60 stories mostly from his experience as CEO of World Vision Australia.

Tim is also unashamedly a Christian and his faith is often apparent in his stories.  So too, is his commitment to social justice.  Occasionally the stories felt a little flat, but with 60 stories being told Tim can be forgiven this.  What is never very far from the surface though is his obvious concern for a world in which the poorest on earth are given a much fairer deal.

In order to achieve that better deal Tim acknowledges that “the sharpest tool on the development rack” is the empowerment of women.  A number of his stories portray this principle and he backs his claim up with convincing arguments and data.  He notes, for example, that for every dollar earned by a woman around 90 cents will flow to the family and kids, whereas only 40 cents of every dollar earned by a man will do likewise.

Tim’s writing style is easy to read using short snippets (often only a couple of pages long), and always told with compassion, honesty and occasional pathos.

But don’t get fooled into thinking that these are all feel-good stories about how we in the West, via charities like World Vision, are helping the “deserving poor”.  Tim Costello often squarely places responsibility for poverty on Western ideology, culture and consumerism.

Take chocolate for instance.  Tim tells the story of travelling through Ghana and the Ivory Coast and seeing lots of ill-fed, undernourished children spraying dangerous chemicals to kill weeds on cocoa plantations.  Many of these children, he was told, are been displaced far from their homes.  The reason for the use of child labour and poor working conditions, Tim says, is “because the economics determine that we in the West want to eat cheap chocolate.”

Tim Costello’s faith and humanism come together overtly about two-thirds of the way through the book in a story titled “Salvation that is public and personal”.  Following the visit of a South African preacher to the university where Tim was a student he came to the realisation that “the hope of the Gospel must address the big issues of racism and power”.   And address these issues he does.

Every now and then at the end of a story I was left wanting more, almost bemoaning that the story was unfinished.   As I read further though, the more I began to realise that perhaps that is the point: the stories are never finished.  Our work, and Tim’s work, for social justice is never finished.

The book “HOPE: Moments of inspiration in a challenging world” can be purchased online from the World Vision Australia web-site.  Click on the tab in the centre of the home page: www.worldvision.com.au
Posted by bruce meder at 13:52