Book Review: Chaos Point 2012 and Beyond 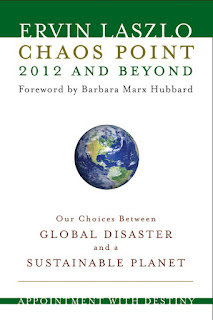 Born in Hungary, educated at the Sorbonne, taught at Universities throughout US, Europe and Asia, Ervin Laszlo is passionate about humans using their collective consciousness to avoid global disaster and to be able to strive for a sustainable planet.
“Chaos Point 2012 and Beyond”  bluntly reminds us that we have a choice.  We either breakthrough to a new society or we breakdown and collapse.  What’s more, says Laszlo, we only have a short window of opportunity to determine which path we will take.  Using the now well-known Mayan calendar (supposedly having the World ending on 21 December 2012) as his reference point, Laszlo clearly points to this “window of decision” being now – right now!
The book is a compelling clarion call for us to use our individual and collective consciousness to tip the balance in favour of breakthrough.  Chaos is used deliberately in the title to refer to the theory of chaos.  That theory suggests that systems can become chaotic just before they bi-furcate and enter a new state of stability.  The tipping point from one state to the next can be, and often is, a tiny perturbation and the outcome cannot readily be predicted ahead of time.
Laszlo suggests that the Earth and human society is currently undergoing a period of chaotic instability and uncertainty.  On the one hand this instability could (especially if we continue on a business-as-usual path) breakdown into: devastating climatic change; air, soil and water deterioration; high levels of poverty; infectious epidemics; an expanded scale and scope of terrorism and organised crime; heightened levels of anxiety and fear, leading to greater repression.
Or, instead of breakdown, we could breakthrough to: measures that safeguard the environment; the creation of effective food and resource distribution; greater levels of trust and respect.  In short, we could enter a period of true development, sustainability and social justice.
Normally in a chaotic system the outcome emerging from small fluctuations cannot be predicted.  Laszlo notes, however, that we have consciousness and the wise use of that may be the one perturbation that makes all the difference.  He contends that “conscious members of the social system can grasp the nature of the evolutionary processes that unfold around them and can purposefully intervene… They can tip the system toward the evolution that is line with their hopes and expectations.”
As a former Professor of Philosophy, Systems Science and Futures Studies and founder of Worldshift[1], Laszlo brings a cogent and coherent understanding of systems theory and sustainability to this slim (it’s only about 150 pages long) yet comprehensive volume.
If you are concerned with where we have been, where we are and where we are going and want to know how we got here and how we can get to a better place; then get a hold of this book, read it and help tip the balance.


[1] WorldShift 2012 is a global social network dedicated to sustainable transformation and conscious evolution.
Posted by bruce meder at 15:22