Fuel Consumption Is A Problem 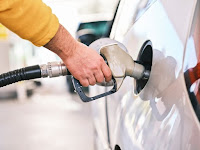 In our world today climate chaos is recognised as a huge issue, and our consumption of fuel is acknowledged as a major contributor to that chaos. We must do something about it.

However, we are not doing the right (best) thing.

We are trying to do something by focusing upon the noun in the phrase – fuel. Sadly, most of the actors in the conversations around climate chaos are doing this. Those in the business of providing fuel (whether it be electricity, vehicle fuel, fuel for cooking, or fuel for manufacturing purposes) are continually seeking ways to make fuel production cheaper (to increase profits.) Those who are consuming fuel are also searching out ways to bring their fuel costs down. There are many too who, concerned about the emission of CO2 from fossil fuels, are keen to promote alternative fuel sources.

However, doing something about the fuel (whether making it more efficient, substituting with alternatives, or offsetting the emissions) will change nothing. Indeed, it will keep sending us down the same rabbit hole.

Making fuel more efficient to use is a blind alleyway. Mostly, what happens when something is made more efficient, is that people use it more and/or a greater number of people use it. This concept even has a name – the Jevons Paradox (a.k.a. the Rebound Effect.)1

When Henry Ford introduced his Model T Ford in 1908 a driver was able to travel 100 km on about 11 litres of petrol. Today’s driver will travel 100 km using about 8 - 12 litres, hardly a significant gain it would seem – on first sight. Part of the reason for this is that the efficiency gain has been taken up by increased vehicle weight. The heaviest Model T Ford was about 750 kg, today the average private vehicle is about 1,800 kg – 2.4 times heavier. Thus, in the case of private vehicles, greater efficiency has meant bigger and heavier cars, not a reduction in use of fuel. If Jevons were alive today, I’m sure he would be smugly thinking to himself – “I knew it!”

What about alternative fuels? There is a lot of hope placed in the possibilities of; “renewables” (especially wind and solar) for electricity production, lithium-ion batteries for cars and light trucks, hydrogen-fuel cells for air transport, and possibly some other breakthrough-to-come (e.g. sodium-ion batteries.)

Yet, each of these are fraught with difficulties of; scalability, time-lag (from research and development to production,) depleting access to minerals,2 limits on efficiency,3 and poor EROEI (Energy Return On Energy Invested.)4

Furthermore, Simon Michaux (one of the world’s foremost energy and minerals analysts) has estimated the amount of extra electrical power required to phase out use of fossil fuels is almost 38,000 TWh (Terawatt hours.) This figure is approximately 2 ¼ times as much electricity as coal, oil, and gas presently provide, and an increase of 318% greater capacity in all “renewable” electricity generation (including hydroelectricity and nuclear power) than is available today.5

Significantly too, with the rapid growth of the twin favourites of “renewables” (wind and solar) this century, all of that growth has simply added to the supply of electricity – none of it has substituted for fossil fuels at all. William Jevons has been proved correct again.

Remember too, that electrical power generation from wind and solar make up only ¼ of the global “renewable” mix – the rest is primarily nuclear and hydropower. The numbers just are not stacking up when it comes to focussing on fuel as the problem.

The most serious concern however, is that each of these alternatives (like fossil fuels themselves) damage local eco-systems and are frequently disruptive of local (often indigenous) communities.

Just two weeks ago, Bala Chambers, an Anglo-Brazilian freelance reporter and researcher reported on the opposition of a number of Argentinian environmental groups to the mining of copper, gold, molybdenum, and lithium in the country.6

One of these groups is the Assembly of Ancasti for Life based within the Lithium Triangle. One of its members, Luciana Fernández (an anthropologist, teacher, and mother of four children) branded lithium exploration as ‘another green capitalist discourse to continue generating new products that get placed in the marketplace – all in the developed world.’ (my emphasis.)

Fernández and others, such as Freddy Carbonel, from the northern, mountainous area of Argentina (who has been an environmental advocate since the 1980s) are opposed to the destruction of eco-systems, including waterways, animal habitats, and local communities  - all to fuel rich consumer-industrial societies.

Such opposition and protest is not restricted to Argentina and the Lithium Triangle (including Chile and Bolivia.) Similar groups and opposition exists in Tibet, the USA (Thacker Pass,) and Portugal.7

Solving the problem of fuel consumption by focussing exclusively on the noun (fuel) is not the answer.

The Verb ‘to Consume’

Why is it that very few people and groups are unwilling to seriously question the verb in the sentence: “Humans consume fuel”?

Yet, our consumption levels are where the problem really stems from. Surely, that should be where we look for solutions.

Humans have, in parallel with all living creatures, had to consume. We have had to consume resources to feed, clothe, and shelter ourselves. For thousands of generations we did so within the limits of the natural world. However, over the past couple of centuries, and increasingly so since the end of WW2 we have consumed the planet’s resources at an alarming rate. William Catton (populariser of the term Overshoot)8 calls this period of human history the Age of Exuberance. We have exuberantly raided our planet’s storehouses and left waste and rubbish in our wake.

The eco-theologian and cultural historian Thomas Berry, suggests that this exuberance is an understandable outgrowth of our disconnection from our natural, and sacred, association with Nature – our home. Consumerism, he states, ‘…has found its ultimate expression in our own times, when the ideal is to take the natural resources from the earth and transform them by industrial processes for consumption by a society that lives on ever-heightened rates of consumption.’9

Catton, Berry, and others, clearly understood that the problem lies in the verb – to consume. How many others do?

Do we see any sign of a global movement questioning consumerism and seeking to find the solutions to overshoot?

Yes! Signs exist in the De-Growth movement, the Deep Ecology movement, and with eco-psychologists. But these movements are small in comparison to the movements advocating for, and promoting, alternative fuels.

Very few seem willing to examine what it would mean to consume less, or how we might make the transition towards less consumption. Why?

Perhaps because the implications would disrupt our ‘ego-logical desires for the 6 “Cs” of comfort, convenience, consumption, certainty, control, and coherence.’10 We might need to question who we are, and what our place in this world is, or should be? Is that too hard?

In the meantime, the majority of our thinking, planning, finances, and creativity is weighted towards seeking new, exciting (even sexy), alternative sources of fuel.

We must shift our focus from the noun (fuel) to the verb (to consume.) The sooner we do so the better.

1. Named after the English economist William Jevons, who first noticed the effect in the use of coal in 1865.

2. See for example Simon P Michaux, The Mining of Minerals and the Limits to Growth, Geological Survey of Finland, Report Number 16/2021, March 2021.

4. See for example: Megan Seibert and William Rees, Through the Eye of a Needle: An Eco-Heterodox Perspective on the Renewable Energy Transition, Energies journal, 2021. https://doi.org/10.3390/en14154508

9. Berry, Thomas, The Dream Of The Earth, Counterpoint, Berkeley, California, 1988.