Re. Reweaving The Web Of Life (Book Review) 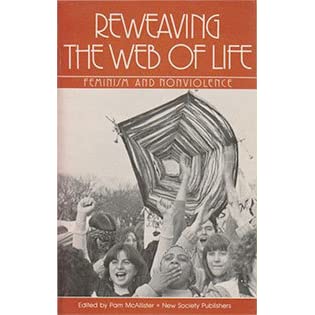 Just over forty years ago Pam McAllister edited one of the most important books exploring the interface between feminism and nonviolence. With more than 50 contributors writing articles, letters, poems, and songs, Reweaving The Web Of Life1 proved just how incisive and diverse could be the critique of patriarchy. It also helped to unlock the door into a new society beyond the confines and constraints of inequality and violence.

Pam McAllister and the other women (although two men did co-author one article, More Power Than We Want) contributing were not only pointing out the failings of patriarchy and the existing world-order, they were looking forward, expectantly, to a different future. Importantly, they recognised that the future and the present were intricately linked (one of the many wefts and warps woven into the book) together. As McAllister put it in her Introduction:

‘A new world, the world I long for, cannot be built with the tools, psychology, belief systems of the old. It will be born of the changes encoded in the details of our lives as we are living them now. The fabric of the new society will be made of nothing more or less than the threads woven in today’s interactions.’

The title of the book comes from the title of Catherine Reid’s essay – Reweaving the Web of Life ­– in which she tells the story of a group of women calling themselves The Spinners. The Spinners were allied with the “Vermont Yankee Decommissioning Alliance” opposed to the construction and then continuance of a 620 MWe nuclear reactor on the Connecticut River.

Reid’s essay tells how The Spinners used thousands of yards of coloured yarn, threads, and strings which they secured to various trees, and then began spinning and weaving before the police could respond. Significantly, the nonviolent action of The Spinners took place just three days after the beginning of the accident at Three Mile Island nuclear reactor.2

The story of The Spinners is one of dozens of examples of the use of nonviolence by women cited in the book.

McAllister writes of how a Tarot card reading helped her with the strength she needed to write the book. One of the cards she took was labelled Strength and showed a woman stroking a lion. The convergence of feminism with nonviolence and strength is clear in the symbolism.

It is no coincidence that McAllister wove together the threads of feminism with those of nonviolence. In common with many feminists at the time, McAllister raged at ‘patriarchy’s brutal destructiveness’ and refused to adopt it’s (violent) ways. Furthermore, she asserted that she ‘refused to give in to despair or hate or to let men off the hook by making them the “other”.’

In that statement McAllister alluded to one of patriarchy’s underpinnings – that of separation and disconnection. McAllister, and the other contributors were having nothing of that sort of divisive thinking. For many within progressive movements of the time this (idea of non-separation) was quite a radical thought.

All but one of the contributors were US based, which was a deliberate decision on McAllister’s part. She intended following up with a book featuring contributors from other parts of the world. That idea morphed into two books presenting stories of women using nonviolence from all over the world: - You Can’t Kill The Spirit (1988) and This River of Courage (1991).

Reweaving the Web of Life is a landmark book, bringing together as it does, many contributors writing about the theory behind feminism and nonviolence, as well as telling stories of actual experience.

For anyone wishing to delve deeper into ways to re-weave the web of life, then this book is a must-read.

2. The Three Mile Island accident was a partial meltdown of one of the reactors at Three Mile Island nuclear power plant in Pennsylvania in March 1979. At the time, the International Atomic Energy Agency (IAEA) rated the accident at Level 5 on its 7-level International Nuclear Event Scale. It remains the most significant nuclear accident in US commercial nuclear power plant history.