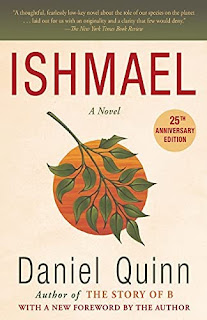 Have you had the experience of reading, hearing, or seeing reference to something so often that eventually you say to yourself “I have to check that out.”?

That’s how it has been for me with this book. First published in 1992, with a special twenty-fifth anniversary edition in 2017, Ishmael is now thirty years old.1

Ray Bradbury2 praised the book, stating that “Ishmael is a genuine discovery. It will be around for many years.” It is still around, and thankfully so, for it is just as relevant today as it was then, perhaps moreso.

The cover of the book claims it to be “A Novel.” In reality it is more of a Socratic dialogue, with Daniel Quinn (the author) writing in a manner similar to Plato’s writings with Socrates as the main character.

Ishmael (the teacher,) using a searching and probing technique, takes his “pupil” on a journey to discover the story that our present-day cultures have been enacting for the past 10,000 – 12,000 years. It is an enlightening journey as it uncovers a forgotten past that sheds an entirely different meaning on the stories of Adam and Eve, the Fall, and the murder of Abel by Cain. Most of us recognise these stories from the Bible, and even if we are not religiously inclined, they are the stories that we have been enacting ever since.

Ishmael and his student meet each other because of a simple newspaper advert: “Teacher seeks pupil. Must have an earnest desire to save the world. Apply in person.” Who could resist such an opportunity? Ishmael’s pupil can’t.

Significantly, Ishmael’s pupil is never named in the novel. This omission allows us, the readers, to become the student. The student could be any one of us.

Without revealing too much of the plot, nor the teachings, Ishmael helps his student see the history of the world over the past 10,000 – 12,000 years as being a continuing conflict between the Takers (represented by Cain) and the Leavers (represented by Abel.) Which of these is dominant and dominating can be guessed at when the story of Cain and Abel is recalled.

How do these two human trajectories play out in the novel? I will leave that for you, the reader, to discover in your own “reading” of the novel, the dialogues, and the stories.

As for Ishmael himself? Well, Ishmael is a gorilla, taken from his home and kept as a fairground attraction. Initially, that Ishmael is a gorilla may be a bit jarring. However, understanding the novel, and the stories it tells, in a mythical sense, then it is entirely appropriate that the teacher is a Leaver, and is caged by the Takers.

Yes indeed, Ray Bradbury was correct. This is a book that deserves to be around for many years. It deserves re-reading often, as perhaps do the sequels (My Ishmael and The Story of B.) I’ll go and read those next.