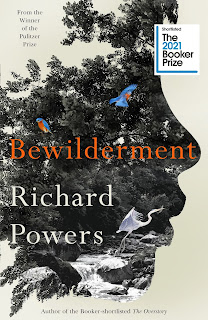 Bewilderment1 picks up a theme explored exceptionally well in Richard Powers critically acclaimed 2018 novel, Overstory. Where Overstory told the story of human-nature disconnection mostly from the point of view of nature, Bewilderment explores that disconnection through the eyes of two living, and one dead, human.

Theo Byrne is an astrobiologist wondering about how life may have evolved on other planets. His nine-year old son, Robin, is simply wondering. Yet, his wonderings are profound, and because of this, is ostracised by his classmates.  Alyssa, Theo’s wife and Robin’s mother, who died in an accident, was a lawyer/advocate working with animal-rights NGOs.

The novel is full of irony. Theo is busy looking for life on exo-planets. Meanwhile, Robin is attempting to draw and paint every endangered species in America.

Powers narrative asks us to view the natural world through the eyes of a nine-year old, and to ask questions that only nine-year-olds seem capable of asking. Bewildering questions.

Together, Theo and Robin, grapple with, and meditate upon Fermi’s Paradox. Named after the nuclear physicist, Enrico Fermi, the paradox asks, ‘where is everybody?’ If the cosmos is full of trillions upon trillions of galaxies, stars, and planets, then life elsewhere must be in abundance, yet there is no evidence. Many explanations for the paradox have been put forward, and Powers skilfully weaves these into the conversations between astrobiologist father and quizzical son.

‘Where is everybody?’ is but one of the bewildering questions explored in Powers’ novel. Thankfully, Powers does not try to answer them, allowing (almost forcing) us, as reader, to ponder the questions for ourselves. Indeed, further, the questions compel those of us who are older to ask, as Theo does; ‘…ten thousand children with Robin’s new eyes might teach us how to live on Earth.’

Indeed, currently on Earth, it is the young people who are asking the pertinent questions, and who are seeing the world through new eyes. Instead of ignoring them or criticising them, we (the older generation) might rather co-explore (as Theo and Robin do) with younger people what these questions mean.

Look up bewilderment in a modern dictionary, and you will get a definition something like this: the feeling associated with being perplexed, confused, baffled. Yes, there are instances of this feeling in Powers’ novel.

However, I suspect that Powers would like us to question where the word bewilderment comes from, and whether it might have something for us to consider in todays world. The preposition be in Old English had the sense of intensifying the verb following. Be can be thought of as making thorough, or complete.  The verb, wilder, has strong connections to the noun wild, and means lead astray, to lure into the wilds. Thus, a thorough understanding of bewilderment takes us to a thorough immersion into the wilds of nature.

Perhaps this is the sense in which Powers has used Bewilderment for his novel’s title? If so, then pondering its full meaning, we might glimpse some answers.

Bewilderment is an easy-to-read book, deceptively simple in its storyline, yet full of bewilderment.