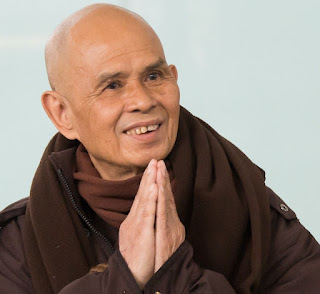 One of the world’s most respected and revered teachers, Thich Nhat Hanh, this week celebrates his 95th Continuation Year.

Born in 1926, Thay (as he is affectionately known) trained as a Buddhist monk in Vietnam. He became actively engaged in seeking peace in that war-ravaged country early on in his life. That experience enabled him to coin the term Engaged Buddhism and develop the ideas of a Buddhist life that not removed from the world and its sufferings.

In 1966 Thich Nhat Hanh created the Order of Interbeing – an international community of Buddhist monks, nuns, and laypeople. The term interbeing has come to be associated closely with Thich Nhat Hanh’s teachings. The English word – interbeing – is an attempt to translate the Vietnamese term tiep hien. Tiep means in touch with, and hien can be translated as realising or making it here and now.

Interbeing then, can be thought of as the interconnectedness of all things.

For most of his later life, Thich Nhat Hanh lived in the southwest of France in Plum Village Monastery, which he and another Vietnamese monk, Chan Khong, founded in 1982.

In late 2018, Thich Nhat Hanh returned to Vietnam to spend his remaining days at his ‘root temple’ near the city of Hue in central Vietnam.

I offer here, a short meditation/poem in celebration of, and dedicated to, Thay. I have called it:

Standing, I feel the earth’s support

Sitting, I rest in peace

Kneeling, I thank the trees and birds

Lying, I wonder at the clouds

Breathing, I inhale the breath of life

Taste the air, smell the flowers

Touch the earth, hear the wind

See the world as a whole

I live because you all give.