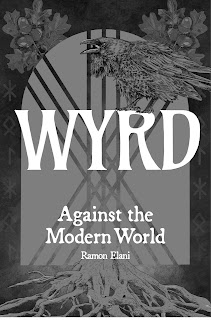 Wyrd1 – a weird title isn’t it?  Wyrd and Weird are connected.  Sadly, the modern English word weird has had almost all its meaning and sacredness washed out of it.  Ramon Elani, however, in this delightful short book, is certainly not about to sanitise or camouflage the meaning of wyrd.

Wyrd is an old Anglo-Saxon word that comes to us via Old Norse. It is related to the Norse word urðr, a personification of one of the Norns – Old Norse deities responsible for shaping the course of human destinies.

Like many such rich and verdant words, wyrd can be thought of in a number of ways. It can be thought of as a process of becoming or unfolding. Perhaps as that which is ordained, or that which must happen. Concepts of rotation and debt are also imbued within its richness. Wyrd is in a state of constant flux.

The concepts and ideas found within wyrd are akin to those found within the Eastern yin/yang idea, and amongst the myths and cosmologies of indigenous cultures throughout the world.

It is a word that reminds those of us from western backgrounds that we too, once had a similar understanding of our place in nature and the cosmos. We too, once recognised patterns and relationships as much more important, and real, than material things and a straight-forward cause-effect linearity. In many ways, western science is only now beginning to re-establish such notions, especially via quantum physics and the mathematics of Chaos Theory.

Ramon Elani elegantly, poetically, and enchantingly, reminds us in his book of this once-was understanding, and pleads with us (modern) western humans to re-discover the sacred of the world.

Ramon Elani is a poet, an author, and a professor of literature and philosophy. He is particularly interested in the intersection between ecology and spirituality.

His interest in ecology and spirituality leads him to conclude in this book that “(modern) humanity has “killed the last god” and climate change represents the full consequences of this act.” In killing off the last god (and goddess) we have also killed off the last demon.

In this killing spree, what is left? Humanity has usurped the role of god and goddess, and become our own demons. Climate change is a result. Elani claims that climate change cannot be healed by “profane means.” Furthermore, he suggests, “the world cannot be fixed, it can only be destroyed and created anew.”

For Elani, creating anew must be achieved through a re-sacralisation of the world, a recognition of our (human) place in the world. Our salvation, Elani notes:

“…depends on our ability to abandon ourselves to the power, flux, and beauty of nature.”

Wyrd is available from https://www.nightforestpress.com/