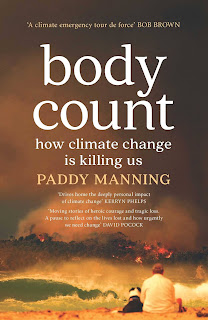 scrolls of war dead, and morbid “bean counters.”  It could easily be a depressing, even fatalistic, read.  Yet Body Count: how climate change is killing us1 is highly readable, even engaging.

Paddy Manning’s 2020 book is set very much in an Australian context, yet the theme, and message, has global reach.

During the southern hemisphere summer of 2019/20 Australia experienced one of its most devastating bushfire seasons.  3,500 homes were destroyed, 34 people died directly, and a further 445 died of smoke inhalation.  Over 18.6 million hectares of land and bush were burnt, and estimates of over one billion animals killed.

Manning begins his book here, amidst the blackened, charred ruins of people’s lives.  Interviews with survivors and relatives of victims give the tragedy a personal, sometimes eerily surreal, presence.

Were these fires caused by climate change?  Or was climate change an exacerbating factor?  Some of Manning’s interviewee’s say ‘yes,’ some say ‘no,’ and others ‘don’t know.’  Such is the problem of attributing single events like this to climate change.  Manning’s scientific references suggest a strong link between climate change and the likelihood of more events such as these bushfires.  Climate change, he says, may not be the cause of a particular event, but it does make the chance of these events significantly greater.

Manning follows these opening chapters with chapters tracing heatwaves, floods, and disease in Australia over the past few decades.  All of these, according to Manning and his meticulous research, have been exacerbated by climate change.

Although Manning cites research and the expert voices of relevant scientists, it is the voices of those affected that give the book its poignancy.  He tells the story of a father and son killed attempting to flee the fires.  He interviews a man devastated by the loss of his wife and two children drowned in flooding.  Manning introduces us to the term thunderstorm asthma, and allows us to glimpse the effect of having their father die from this illness for his two children.  These, and at least a dozen other stories, are brought to life (and death) in Manning’s absorbing style.

As Manning was writing this book the coronavirus pandemic swept the world.  This was no coincidence Manning tells us.  Coronavirus, and other pandemics like it, are symptomatic of the same human-induced ecological breakdown.  Furthermore, his research suggests that climate change is likely to worsen the incidence of pandemics.

Is there any hope then?  Manning titles one of his chapters that way – Hope.  Reading the chapter however, I did not get a sense of hope.  Rather the chapter gives a sense of wasted opportunities, of prevarication of the part of governments and politicians, and the active campaign of business leaders to misinform the public about the realities of climate change.

Perhaps hope is unhelpful anyway.  Hope suggests that someone, sometime in the future, is going to invent something that will make everything okay.  Manning does not address this specifically.  However, if he does offer any hope, he offers it in his final paragraph.  Hope lies:

“In the way families and communities pull together in a crisis… and that ordinary Australians will help and inspire each other through the tough times to come.”

Indeed, this can be said of communities throughout the world.