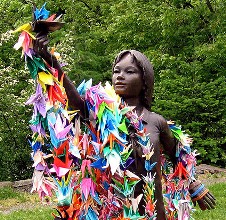 Today is a Diamond Anniversary.  75 years ago today (6 August 2020) the first atomic bomb was used as a weapon, with the Japanese city of Hiroshima the target.  Only once since then has the atomic bomb again been used as a weapon – just three days later on another Japanese city, Nagasaki.  Estimates of the numbers killed vary, but 200,000 plus seems likely.

Although the numbers of nuclear warheads have been reduced from the height of almost 65,000 in 1986, there are still 13,400 nuclear weapons stockpiled around the world – 90% of them in the hands of the US and Russia.

Spending on nuclear weapons has been exorbitant, yet it’s set to increase.  The US budget this year announced a strategy to replace nearly the entire US nuclear arsenal, at a cost of $44.5 billion for 2021, and increase of 19% from 2020.  From now until 2050 this program is expected to cost over $1.5 trillion, and may be as high as $2 trillion.

Globally, the amount spent on nuclear weapons in 2019 was $72.9 billion, up $7.1 billion from the previous year.  Nuclear weapons spending is enormous, getting bigger, and blatantly immoral.

The costs are significant.  The two bombs dropped on Hiroshima and Nagasaki killed 200,000 people; the moneys spent on nuclear weapons today just as effectually kill millions today.  Consider these estimates:

·       In the world today 2.1 billion people do not have access to safe drinking water.

·       It is estimated that $150 billion per year would be needed to provide clean safe water for everyone on the planet.

·       2 billion people throughout the world (mostly in Africa) do not have sufficient, healthy food.

75 years – a Diamond Anniversary?  Hardly.  Unless the diamond is used to cut through the immorality of it all and shine a light on a peaceful world.

Email ThisBlogThis!Share to TwitterShare to FacebookShare to Pinterest
Labels: Anti-War