Planet Of The Humans (A Review) 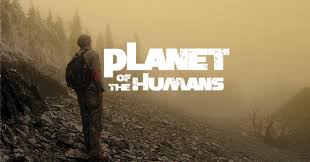 "How long has the human race still got here?"  So begins the latest (free to view) documentary/movie
from the Michael Moore stable.  This time the movie is directed by Jeff Gibbs.

Posing that question to a few people in the street, Gibbs obtains answers ranging from a couple of years, through one million years, right on up to "infinity," although I suspect those that gave that answer may not have heard of the Big Bang either.

It's an interesting question, one which probably has no definitive answer.  It is just one of a number of crucial questions the film asks, all revolving around the theme of climate change and other planetary support systems.  Here are a couple more questions to ponder before seeing the film:
If you answered "Yes" to any or all of those questions, then this film says - Think Again!

The film begins by acknowledging and recognising that "we have known about the dangers of climate change for six decades."  We have yet to address these dangers.  This film contends that the seemingly consensus answer to the issue is untenable.  Switching from fossil fuels to green, renewable energy is not going to solve the problem Gibbs says.  Instead, he asks another pertinent question: "Is it possible for machines made by industrial civilisation to save us from industrial civilisation?"  That, is a vital question.  Not so much for the direct answer we may get, but because the question strikes at the very mode of thinking in which the (predominantly western-styled) world operates.  The mode of thinking that has brought us to the present impasse.

Three corollaries to that question are further posed in the film:  "What if a single species took over the entire planet?  What if that species goes too far...goes way, way, way, too far?  How would they know when it is time to go?"  These are questions of importance, as they go to the heart of who we (humans) are, what our purpose is here, and where do we fit in the grand scheme of things.

However, there is a semblance of a fair critique of renewable energy.  Solar and wind, and electric vehicles all use materials dug from the earth for their construction, some of which are environmentally and socially damaging - particularly the materials needed for battery construction. (1) Unfortunately, this film only skims over these issues.  It would have been better to focus on these rather than get sidetracked into biomass.

If the film does suggest a solution, then it does so by hinting at population control.  The film notes the enormous rise in the world's population since the beginning of the Industrial Revolution, and suggests that this is the basic problem.  In part it is, but what needs to be asked is - which population?  The world's people are not created equal.  The poorest are often those at most risk of climate change, yet are also those who have contributed the least to carbon emissions.

Some have criticised the film on these grounds, claiming it to advocate ecofacism.  I'm not sure that I could detect an answer that extreme in the film.  Unfortunately however, the film stops short of the logical step of reigning in the consumption level of large proportions of the earth's population.

The film rightly notes that climate activism looks for a solution in the supply side of the equation.  It looks towards new, renewable, green energy as supplying us with the energy we need in order to be sustainable.  Therein is the mistake, as the film rightly points out, but fails to follow up on.

If we are going to find a way to heal this world, and ourselves, then we must begin looking at the consumption side.  Since 1980 the world's population has increased from 4.5 billion to 7.6 billion in 2017 - an increase of 70%.  In the same period the global demand for electricity has increased 205% and the number of private vehicles on the roads of the world has also more than doubled.  It is more than simply population growth - it is an insatiable consumption appetite. (1)

Planet of the Humans is available free of charge from the film's website.

Note:
1. In a previous blog post I referred to the environmental and social problems associated with electric battery construction, as well as to the overall consumption disease afflicting western-styled cultures.