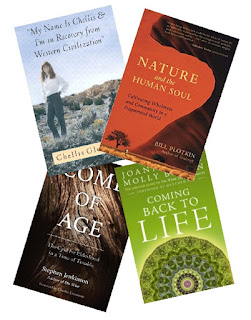 Once we begin to feel a concern for the state of the world today, we inevitably become faced with some questions.  How did this come to pass?  Why are things the way they are?  If we can answer those, we then ask: how do we proceed?  How can we heal?  How can we make things better?

If these are the types of questions you are asking, then these four books are essential reading.

They are presented in a sequence, but do not have to be read in that sequence.  Each stands on it’s own highly recommended merit.

A word of caution first: don’t expect these books to provide full and complete answers.  They may, indeed, prompt more questions, and certainly, further explorations.

My Name Is Chellis & I’m in Recovery from Western Civilization.

Besides having one of the most enticing and intriguing titles around, this book is the perfect way to explore the historical roots of today’s demise and uprootedness.

Chellis Glendinning, PhD, is a psychologist and one of the pioneers in the field of eco-psychology.
In this short book (just 200 A5 pages) Glendinning strongly suggests that western culture is suffering a collective trauma which for many in that culture is experienced individually.  She suggests that the root of this trauma is our original disconnection from nature begun when we began to domesticate animals and plants.  Disconnection continued on through the process of settlement, and the establishment of “private” ownership, and has been greatly exacerbated since the "Age of Enlightenment" and the Industrial Revolution.

This original trauma is today played out in our addictions, primarily, she says, our addictions to technology and perpetual growth.

What’s our next step then?  I won’t add a spoiler.  Get hold of the book and read it.

Nature and the Human Soul

Bill Plotkin has written one of the block-buster eco-psychology books of this, and last, century.
Plotkin describes the human development journey as incorporating eight stages, from birth, through childhood, adulthood, elderhood and on to death.  Each stage is meticulously described as having its own purpose, gifts, and tasks.

No stage is more, or less, important, than any of the others.  Indeed, the last sentence of every chapter describing these stages, is the same: “this was the best stage of life to be in.”

One of the sad, but not surprising (when you consider the state of the world), conclusions that Plotkin comes to is that most of western culture is stuck in a poor facsimile of Stage 3; a patho-adolescent version of what should be.

But, stuck or not, Plotkin contends that it is always (even much later in life) possible to undertake the tasks of a stage from earlier in chronological life, and so move on.

Nature and the Human Soul is not a book that can easily be absorbed in one reading.  It requires close attention, careful and thoughtful reading.

The book is really only a beginning.  Plotkin founded the Animus Valley Institute in 1980 to provide experiential journeys into the many mysteries and discoveries that become possible when nature and the human soul are connected.  The experiences run through the Institute immerse one in the ideas and concepts outlined in this book.

Subtitled The Case for Elderhood in a Time of Trouble, Canadian Stephen Jenkinson has one simple question to ask.

How is it that in a world where there are more and more old people, we seem to be getting fewer elders – at the very time that they are needed most?

That is a damn good question.

Jenkinson attempts (and I think, succeeds) in answering that question not by describing what an elder is, nor how to become one, but by tracing it’s loss.

Rather like describing a bowl by the emptiness inside, Jenkinson traces the loss (in western culture) in language, history, culture, concepts of time, psychology, religion, spirituality, personal growth.

Like Plotkin’s book, this is not an easy book to read.  Indeed, on first reading, I succumbed to allowing Jenkinson’s words and ideas wash over me as if in a soothing and relaxing bath.  The second reading allowed me to understand the depth of the bathwater and discover the nuances of those ideas, and sometimes the bitterness in the water.

Where are the elders – at the very moment in time they are most needed?  Very few and far between, but those who read this book may be able to prepare themselves for a time when “certainty is over (and one’s) plans are in ruins.”  Again, to appreciate the depth of this assertion, read the book.

Coming Back To Life

Joanna Macy has been working to help people feel through their pain and despair for the world and get to a place of empowerment since the early 1970s.

In this book/manual, co-authored with Molly Brown, she notes that humans are at a point in time when we have a choice between three stories.  “Business as Usual” is the story that has been part of western culture for many centuries, and exacerbated since the Industrial Revolution.  “The Great Unravelling” is the story that continuing the “Business as Usual” story will morph into.  It’s not a story with a happy ending.  The third story, the one Macy advises us to choose is “The Great Turning” that enables us to move towards a life-sustaining society that respects all of life upon Earth.

Macy and Brown follow a 4-step healing process beginning with gratitude, honouring our pain, seeing with new eyes, and going forth.  Each step in this process is fully described, with many exercises that allow a comprehensive exploration of that stage.

Although the book can be read individually, the real value is in undergoing the work in groups.

Some of the exercises in this book/manual are powerful and can elicit deeply felt emotions.  Hence, it is important that the exercises be led by experienced facilitators.

There are numerous links between these books.

Chellis Glendinning and Joanna Macy helped begin the work of acknowledging our pain for the world and sought ways to move through that to empowerment.

Joanna Macy is one of two people (the other being Thomas Berry) who Bill Plotkin chose to interview for his chapters on elderhood.

Stephen Jenkinson clearly sets out the losses (notably that of elderhood) that occur when individuals and cultures get stuck in the patho-adolescent stage described by Bill Plotkin.  Jenkinson also maps out the reasons for there being not enough Joanna Macy-s in the world.

Coming Back to Life then opens up ways to experientially deal with many of the issues raised by the other three.

Individually, these four books stand on their own and are worth reading in their own right.  Together, they make a quartet of immense knowledge and wisdom, each enhancing that of the other three.

They are essential reading.
Posted by bruce meder at 08:56