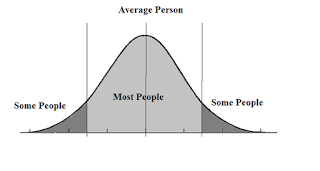 Let’s face it.  Most of us are mediocre.  Most of us lie within two standard deviations of the mean (average).  Most of us reside in the middle of the classic bell shaped distribution curve so beloved of statisticians.  That means most of us have an IQ of between 70 and 130.  Most of us, too, have average EQs (Emotional Quotients).

Our elected politicians are also mediocre.  The reality of this hasn’t really occurred to us, though.

For example, most politicians believe themselves to be way above mediocre, or at least, act as if they are.  But, who can blame them?  When we vote for them, we have an expectation that they are above mediocre, and are able to make decisions that are better than mediocre.

Yes, we have higher expectations of elected politicians.  We expect them to be more than mediocre.  Then, we get disappointed, or frustrated, when they don’t meet this high expectation – when they act and make decisions that are mediocre.

Yes, most of us are mediocre, just like our politicians.  Except in one crucial sense.  Our politicians are not representative of the general, average, citizenry.  If we look closely at our politicians, we will find that most of them come from privileged backgrounds and with a narrow range of experience.  There are financial advisers, teachers, business managers, academics, or the occasional celebrity.  How many plumbers, hairdressers, posties, bank tellers, or caregivers are there?  How many common folk are there?  Very few.

The common folk – the commoners – are little represented.  Commoners are the mediocrity of society, and in this sense, are not represented in our parliaments, senates and congresses.  These institutions are more and more unrepresentative, and in doing so, becoming less and less “mediocre” – or “common.”

Therein, lies the issue at the heart of democracy – our elected politicians are not commoners, they are not representative of the mediocrity.

Yet, we should not despair.  Mediocre has a lot going for it.  If we think of mediocre as being a synonym for common, then let us go back over one hundred years to a story of a country fair and a retired English statistician and hereditary scientist, Francis Galton.  When he walked to his local county fair, Galton, then in his 80s, had spent his life attempting to prove that most people did not have enough intelligence to lead society.  Wandering around the fair he came across a competition to guess the weight of an ox.  Amongst the entrants, there were a few cattle breeders, butchers, and farmers who, Galton surmised, would be expert (better than mediocre)enough to guess fairly accurately the weight of the ox.  However, most of the almost 800 punters were common folk, with no apparent expertise in ox-weighing.  After the competition had ended and the prize-winner announced, Galton obtained all the winning entries from the organisers.

Being the statistician that he was, Galton calculated the average guessed weight. Before doing so, Galton hypothesised that this average guess would be a long way from the true weight because most of the punters were non-experts (simply mediocre commoners).  However, what Galton discovered staggered him and challenged him to re-think his ideas about expertise and “common” knowledge.  The true weight of the ox was 1,198 pounds – the average vote turned out to be 1,197 pounds. This average was closer than that of any of the individual “experts” who had entered the competition.

On that day in Plymouth, 1906, Galton discovered what has since come to be known as “the wisdom of crowds.”  Since Galton’s time, many researchers and activists have sought to discover what can happen when a group of ordinary, common (mediocre) people are brought together for some specific purpose.  These activities and experiments have suggested that Galton had only scratched the surface of the “wisdom of crowds” phenomenon.

How do we tap into this wisdom of crowds?  How do we discover the expertise lying in wait amongst the mediocre?  How do we bring commoner-sense into our collective decision making?  How do commoners become involved and represented in our public decision-making bodies?

Elections, voting, and so-called “representative democracy” are not answering those questions.
The simplest way of tapping into that wisdom, and enabling common-folk, is to use random selection.  Yes, randomly select decision-makers from amongst the mediocre.

Wait, don’t dismiss this option too quickly.  It has been used many times throughout history, most notably in the very birthplace of democracy – Athens.  Athenian democracy used voting only in special cases.  Most of their public decision-making bodies were made up of randomly selected commoners.  This method is known as sortition.  I will not go into further depth in this blog, as I have written much on this in past blogs.  Readers interested in searching further may wish to search this site using the keyword sortition.

Perhaps mediocre democracy has a future.