How Close To Climate Crisis Are We? 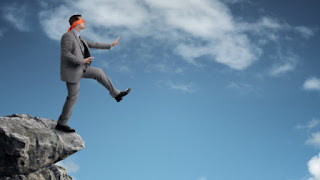 How close to climate crisis are we?  Some argue, like Paul Kingsnorth, that we have already passed the tipping point and that the best we can do is to hold a wake.  Once an environmental activist, Kingsnorth now refrains from talking about “saving the planet,” focusing instead on what we can do in the face of the crisis.  Others remain firmly of the belief that things will get better, that we can retreat from the impending crisis.  Both of these perspectives suggest we are very close to climate crisis – one believing the crisis has happened, the other that it is near.

There is another way of asking, and answering the question: how close to climate crisis are we?  That is to ask it from the perspective of our individual and collective psychology.

Perhaps the first book (and research) to be published alerting the world to the limits to growth was -The Limits to Growth,1 published in 1972.  Tellingly, the first figure in that book (on p19 of more than 200 pages) was one that looked like the following: 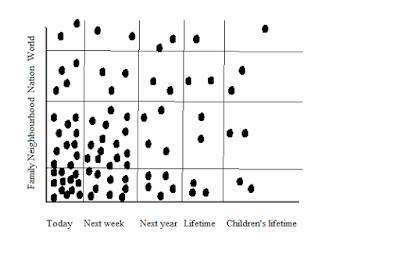 People’s concerns lie somewhere in this time/space continuum.  For most people their concerns are close to home; for their family, friends, and perhaps local community.  Their concerns are for the near future; getting the kids to school today, or next months annual holiday.  The further out from the immediate local environment we go, the less the number of people with concerns.  Similarly, the further into the future we venture, the less the number of people concerned.

For those concerned about climate change, this perspective is of concern.  Climate change dialogue, activism, policies, and research is mostly situated in the upper right hand corner of the time/space continuum, as pictured below: 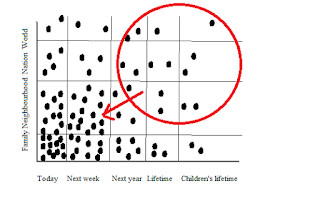 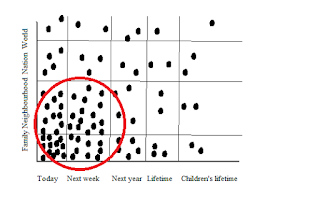 Hence, the key question for those concerned about climate change must be: how do we shift the debate from the upper right hand corner to the lower left hand sector, where most people are?

I do not know the answers to that question.  However, there are some psychological understandings that may be worth looking at when attempting answers.
What does all this suggest?

Those concerned with climate crisis need to think about:
Well, I said I didn’t have the answers.  Perhaps I have stimulated some questions though.