Have We Lit The Explosive Fuse? 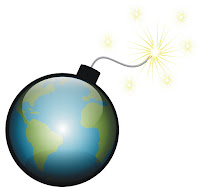 In conversation with a friend today he remarked that people often change only in response to pain, or at least, because they are dissatisfied with something.  Disenchanting as that may be, he may have a point.

If an individual plays with matches they will probably burn their fingers at some stage.  With burnt fingers, they may decide that playing with matches is a harmful thing to do.  So, with the benefit of pain, the individual changes their behaviour.  What if, instead of burning their fingers, the individual uses that lit match to light the fuse of an explosive device?  Boom!  No chance for change in behaviour after that.

Perhaps, collectively, we haven’t burnt our fingers enough and have already lit the fuse on the explosive that will condemn us all?

All systems, especially natural systems, have time lags.  Global warming is no different.  We can experience this lag in our day to day living.  The hottest time of day is often about three hours after midday, when the sun is at its zenith.  Similarly, the hottest days of summer are about two months after the summer solstice.  This simple observation should warn us that global warming will continue to rise – even if we stopped pumping carbon into the atmosphere today.

Indeed, the science tells us that if we did stop completely (yes, completely) emitting carbon into the atmosphere, the Earth’s temperature would rise by 0.6 degrees C.  That is unlikely – it is more likely to be well beyond that.  Simply by living, we humans will pump carbon into the atmosphere.  Even if we cut back, the likely scenario is that the Earth’s temperature will rise by 4 – 6 degrees C.

A term has even been coined for this new age – the Sixth Mass Extinction or the Holocene Extinction.  In the earth’s 4.5 billion year life there have been five previous mass extinctions.  This sixth one (sometimes called Anthropocene) is human-induced, and we humans may be the victims of our own behaviours.

I repeat:  Collectively, have we already lit the fuse on the explosive that will condemn us all?  Furthermore, we may not be able to defuse it.

If so, what do we do?  Some, like Paul Kingsnorth,1 reject trying to “save the earth,” and ask us to think about what is possible.  “The only hope I have given up,” he asserts, “is false hope.”

Perhaps the words of Vaclav Havel2 may be worth listening to: “Hope, in the deep and meaningful sense … is an ability to work for something because it is good, not just because it stands a chance to succeed.”

What is good?  Surely, what is good about our lives is the connections we make with one another, the sharing of love and beauty, the opportunity to dance and sing.  What is good is to bring joy to the world, and to share compassion and understanding.

Maybe Kingsnorth and Havel are saying the same thing.

Focus on what is possible and what is good – here and now.

Notes:
1. In his younger years Paul Kingsnorth was a very active environmentalist and a former editor of The Ecologist magazine.  In 2009, he and other artists and environmentalists formed Dark Mountain Project, a group seeking to discover what is possible without relying on “false hope.”
2. Vaclav Havel was the last President of Czechoslovakia and the first of the Czech Republic.  A writer, poet, humanitarian, environmentalist and proponent of direct democracy.
Posted by bruce meder at 11:23