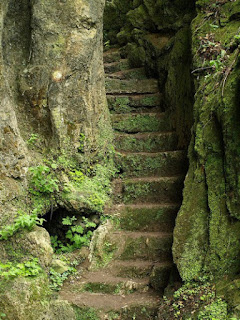 The previous blogpost suggested that when anger arises inside us we are faced with two pathways. The first pathway leads in the direction of resentment, a desire for revenge, and possibly all the way to violence.  Standing at that junction this first pathway is highly visible.  It is well–trodden.  It is lit up with signs seducing you with promises of retribution, righteousness and winning.  It promises relief from the anger.  Yet, as we all know, such promises are illusory.

The second pathway, in contrast, is hard to see.  It is obscured, perhaps hidden by the bushes along the roadway.  Not many turn towards this pathway.  However, many of those that have are house-hold names, giants in the history of the world: Mahatma Gandhi, Nelson Mandela, Rev Desmond Tutu, Emily Pankhurst, Te Whiti o Rongomai, Vaclav Havel, Rosa Parks, Thich Nhat Hanh.1

Anger is often a secondary emotion, meaning that some other feeling or emotion has triggered the one of anger.  The first pathway is very easy to step onto when all we recognise is the emotion of anger.  However, if we are mindful and patient, we can realise that our anger is a signpost to something else within us.  If we allow our anger to dictate our actions then we will never discover the underlying emotions.  But, if we step back, perhaps take a few deep breaths and just witness our anger (not acting on it, nor trying to drive it away, or suppress it), then we may find that the underlying emotions are ones of hurt, pain, insecurity, dejection, revulsion, or (the biggie) fear.

Uncovering and discovering these emotions that lie beneath our anger is how we do justice to our anger.  We treat anger as a friend, saying “thank you my friend anger; you have allowed me to discover my fears and pain.”

The next thing we notice on this pathway is that we are all the same.  Our anger hides pain, hurts and fears.  This is just as true for the person who we believe has angered us.  They too are likely to have acted out of a hurt or fear.  Their words or actions that angered us came from their hurt and fear.  When we start to understand our own suffering then we also start to understand the suffering of others.  With that clarity, compassion can arise.  Once compassion has entered our heart we are well on our way down the second pathway.

But, what about those situations we (as social justice activists) should be angry about?  Certainly, there are many injustices in the world and we get angry because of them.  When Khandro Rinpoche, a Tibetan Buddhist teacher, was asked this question, she replied “Anger is always a waste of time.”  Persisting, her questioner responded that there were some things we should be angry about.  Khandro Rinpoche immediately replied, “I didn’t tell you to give up your critical intelligence.  I told you anger is a waste of time.”2

Along this second pathway there are many tools at our disposal.  Sadly, our cultures have very rarely used these tools and few of us get the opportunity to learn them.  Here, are some of the tools we can pick up on this pathway:
A final word of caution.  Just because we decide to travel down this second path does not mean that the other(s) will join us on the journey.  Although we offer the hand of forgiveness, or the words of NVC, we may be responded to with anger.  Does this mean we should not turn down this path unless our opponent, enemy, or rival does so also?  No.  Vaclav Havel understood this when he noted that, “Hope, in the deep and meaningful sense … is an ability to work for something because it is good, not just because it stands a chance to succeed.”

Anger.  An intense emotion.  With practice, we can work with it, instead of it working us over.