Slow Down, You Move Too Fast 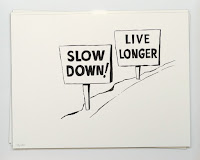 “Slow down, you move too fast,” is the opening line to a Simon and Garfunkel song from 50 years ago.1  In it, the popular duo exhort us to look for fun, watch flowers grow, and love life.  If only we had listened then.

In the 50 years since that song was recorded we have not slowed down, we have sped up – and done so at an accelerating rate.  Our cars are faster and more efficient than they were 50 years ago.  Yet, we are often stuck in traffic, in “rush hours” – a wonderful misnomer if ever there was one.  We rush to answer our mobile phones that we carry everywhere with us.  We spend over $570 billion per year on fast food (a term that only entered the dictionary in 1951).  We flip through TV channels quickly switching from one programme to another, without having to move from the sofa.  And what do we end up watching?  Reality TV in which some random group of other humans are rushing about trying to be the best cook, the latest superstar, or the quickest builder.

During the 1960s the average number of phone calls a person received per day was less than  three.  Today, in the US, those aged 18-24 send an average of 67 texts per day, and receive almost the same number.  Even those in the 55+ category are sending and receiving 8-9 texts per day – that’s three times the number of phone calls that were being made in the 1960s.  And that’s just texting.  Add in actual phone calls, emails, facebook and twitter messages and the fastness of our communicating is staggering.

It has been estimated that over 90% of all the data in the world has been generated in just the last two years.  All of this suggests that it is no wonder we suffer from Information Overload (cynically described also as Infobesity and Infoxication.)   To the neuroscientist this is known as Cognitive Overload and can lead to poor decision-making, indecision, and stress.  It’s no wonder that levels of anxiety, stress and depression are on the rise.

All this speed, going quicker, getting faster is going to burn us out.  Its a physiological given.  Ask any competitive 400m runner.  At the end of a 400m race if you were to approach him or her and say, “get up, you gotta do that again, now” you’re unlikely to get a conciliatory reply.  We cannot keep it up.

Not only are we doing ourselves damage, we are also damaging our communities and our environment.  Communities are based on human connection and relationships.  If we are moving through life at such a speed that we do not have time for connecting then the glue that keeps communities together and makes them healthy doesn’t stick any more.  Our environment is threatened when we consume fast food at such an enormous rate that species are threatened, local food supplies are ignored.  Transporting food from one side of the planet to the other increases carbon emissions.  The issue of deforestation for beef production or palm oil plantations is well known and documented.

So, what do we do?  Well, it has already started. Following a demonstration against a proposal to build a McDonalds restaurant in Rome in 1986 Carlo Petrini launched Slow Food to promote local, good food, to enjoy the simple pleasure of eating and to slow down the pace of life.  Since then the movement has grown to a network of around 100,000 members and in 2013 Carlo Petrini was awarded an UN Environmental Award.

Petrini’s advocacy for slow food has spawned a number of other slow scenarios:  Slow Travel, advocating remaining in one place getting to know the local environment and culture, rather than flitting from place to place;  Slow Money, moving investment towards local, organic food production;  Slow Schools, enabling children to learn ways to live “slowly” and sustainably – what has been called “ecological literacy;”  Slow Books, rekindling an interest in reading, and moving away from a culture glued to the television or computer screen;  Slow Living, becoming more in tune with what our bodies are telling us – that the fast pace of life is damaging our health.  The list of “slow” aspects of life goes on: slow parenting, slow fashion, slow cinema, slow science, slow technology …

Beyond these slow scenarios the Slow City concept has also emerged.  Beginning in another part of Italy, Cittaslow has grown into a world-wide network of cities and towns.  Today there are well over 200 cities in more than 30 countries that have signed up to the Cittaslow charter.  Slow cities and towns in the Cittaslow network have a maximum of 50,000 residents, reflecting the concept of localisation that characterises much of the slow movement.  For populations greater than 50,000 there is a Supporter category, as well as another category for individuals or families.

Whilst it acknowledges some benefits of globalisation, Cittaslow also understands that globalisation tends to flatten-out the differences between communities and hide the unique qualities in each local community.  Cittaslow wants to develop “local communities based on the ability to share and recognise their intrinsic specific traits, of regaining their own identity, visible from outside and deeply lived within.”2

Whether we live in a Cittaslow community or not, we can all slow down.  When we do so consciously, not only do our personal lives become more healthy, so too do our communities.  We begin to cultivate local networks of farmers, growers, teachers, scientists, mentors, restaurants, and a myriad of other connections.

Adopting a slow approach to life does not mean that we become isolated or unaware of the global realities and our responsibilities to life everywhere on the planet.  Slowing down in fact allows us to see more clearly the interconnections between what we do locally and the consequences of those actions beyond our immediate environment.  We put into practise the saying: Think Global, Act Local.

2. Cittaslow International Charter, Attachment A, 2014
Posted by bruce meder at 17:52