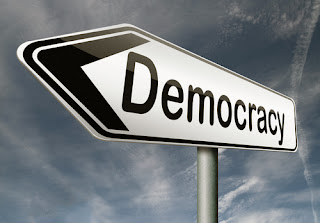 Amongst the hundreds of articles, discussions, and books addressing the ills of today, there are many that speak of what the future could look like.  Visions, dreams - utopias even.  Most of these scenarios of the future look to societies using renewable energy, highly efficient public transport, organically and locally produced food, sustainable fabrics, green housing, satisfying work that provides sufficiency without exploitation, and a raft of other aspects of human life.

Often within those visions there is mention of governments being receptive to this new thinking, and acting in a way that will enable this new society to emerge.  Social action groups too, when determining their strategies, will often target their elected politicians.  There will be talk of deputations, letter writing, petitions, rallies on parliamentary steps, sometimes even support for particular candidates.

“What?  Not representative!”  I can hear the shouts of alarm and incredulity now.  Just look around, look at our politicians.  How many of them are like the person next door, or the shop assistant at the supermarket?  How many look like the barista pulling your morning coffee?  Very few I would suggest.  Furthermore, for how many of them is politics their career?  The sad fact is that it is increasingly so that those who are represented in our democratic chambers are – career politicians.

And that is not good.  Electoral democracy is giving us decision-makers drawn from less and less sectors of society at the very time that the world needs greater diversity of representation in its public decision-making.

So, when we envision new societies we need to also think of new ways to conduct our pubic decision-making.  We need to rethink our democracy, rather than accept it as a given.

Samuel Alexander is a writer who has given much thought to what he calls the “sufficiency economy” – a post-growth economy and society that “is shaped by an acceptance that ‘just enough is plenty’ … (that is) nothing short of revolutionary.”  Alexander notes that, from our current perspective, the shift to this new society “will not arise in liberal democracies until there is a culture that wants it, at which time those cultural values will be embraced by representative politicians and used to shape public policy in order to keep or win office.”  However, as Alexander goes on, “this understanding of representative democracy might be nice in theory, but it assumes that democracies are functioning well.”1

Alexander concludes that democracy is not functioning well.  He is one of the few new society visionaries that has dared to raise the question of democracy in that future society.  He raises more questions than answers in his treatment of this topic.  Are there any answers?

Perhaps there are.  The ancient Athenians in creating democratic processes were keen to “bastard-proof their system.”2  One of their primary mechanisms for doing that was to use the lottery system.  Many, if not most, of their representatives were chose by lot – known as sortition.

Anyone who has sat on a jury knows that those chosen represent a diversity of backgrounds and experience.  Those jurors are charged with making the decision on whether a person is guilty or not guilty.  They do so after having heard the evidence of expert witnesses and the arguments of lawyers.  Their decision is based on this input, not on their prejudices or preconceived notions of guilt or innocence.  Why should such a system of selection not work for those charged with making our public decisions?

The claim that we need to elect people who are best suited or competent to represent us in our parliaments, senates and councils fails to convince.  It fails in two ways.  We can all think of politicians who have clearly been incompetent and open to manipulation and being swayed by corporate lobbyists.  Indeed, too many some would say.  Secondly, it fails because it assumes that we do not have sufficient faith in our own common sense.  If we are competent enough to cast a vote, then we are competent enough to take on a public decision-making role.

A further argument for envisioning a new form of democracy lies in the very faith we put in our present democratic outcomes.  All around the world we see examples of people and communities seeking greater say over their lives and affairs.  From the Arab Spring to Occupy, from blockading mines on threatened farmland to indigenous peoples blockading ports in canoes, from divestment campaigns to Transition Towns; everywhere we look people are demanding greater say.

But governments only know one way to deal with issues – by imposing programmes, laws and restrictions.  The danger then, in putting faith in present democratic institutions to solve our multi-faceted crises, is that we will further enhance the oligarchic approach to public decision-making.  That is a recipe for disaster.

The original Athenian system provides an example of a way to avert that disaster, for it curbs the accumulation of power.  Quoting Dr Fuller again, “(in the Athenian system) power was possible, power consolidation more of a challenge.”2

Yes, it is worth giving thought to new ways of doing democracy; ways that enhance representation, ways that reduce the rise of oligarchs, ways that tap into our collective wisdom and common sense.  This blogsite has written about the benefits of sortition elsewhere.  See here and here.

We cannot dream of a new, sustainable, society without simultaneously imagining a new democracy.  Sortition offers one, hopeful, possibility.

1. Samuel Alexander, Sufficiency Economy, Sufficiency Institute, Melbourne, 2015, Chapter 4.
2. Dr Roslyn Fuller, Creating a Framework for Sortition.  Dr Fuller is a lecturer in International Law based in Ireland.  Her forthcoming book is Beasts and Gods:  How Democracy Changed its Meaning and Lost its Purpose to be published in November 2015 by Zed Books.
Posted by bruce meder at 10:36