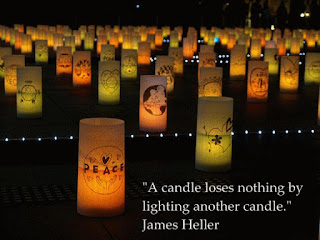 Earlier this week, 21 September, marked the International Day of Peace.  Not that you would have noticed from the news that day.  Instead we had yet more images of the bombings in Syria, attacks in Somalia, and reports of domestic violence in the homes of our nations.

Although the day was established in 1981 by the United Nations you could not be blamed for not noticing it for all that the media took note.  The decade following the UN adoption of the Day of Peace was the bloodiest on record since the end of the second World War.  The highly regarded Stockholm International Peace Research Institute (SIPRI) notes that 2014 saw more wars than any other year since 2000.  Even on the website of SIPRI, with it’s vision of “a world in which sources of insecurity are identified and understood, conflicts are prevented or resolved, and peace is sustained,” it is difficult to find much data or information related to peace.  There is much there about military spending, arms manufacture and trading, chemical and nuclear weapons manufacture etc etc etc.

Peace just doesn’t seem to cut it.  The newspapers rarely mention peaceful solutions, television embraces warfare, and Hollywood movies glorify the carnage and mayhem of war.  Even a search of google results in over 1.3 billion listings for “War 2015.”  A similar search under “Peace 2015” yielded less than half this number.

The nations of the world seem unable to recognise the Day of Peace.  Just two days before the Day of Peace, the Japanese upper chamber overturned Article 9 of it’s post-war Constitution.  That article stated that “the Japanese people forever renounce war as a sovereign right of the nation and the threat or use of force as means of settling international disputes."   The new legislation now allows for Japanese forces to participate in a limited manner alongside other nations in armed conflict in other parts of the world.  Along with nations such as Switzerland, the Japanese renunciation of war as a means of resolving conflict was a beacon of hope.  That beacon now seems to have been snuffed out.

A day for peace.  Surely that is not too much to ask.  Of course, we should be aiming at a Year of Peace, and perhaps even a Decade of Peace.  but if we can’t even manage a day, do we have much hope?

So, we must start where and when we can.  We can bring peace into our daily lives.  We can embark on peace within our homes and our relationships.  We can encourage peace in our workplaces and schools.  If the leaders of the world, and those who report the news of the world, won’t encourage or promulgate peace, then we must do it ourselves.

Email ThisBlogThis!Share to TwitterShare to FacebookShare to Pinterest
Labels: Peace