Who Does The Pope Think He Is? 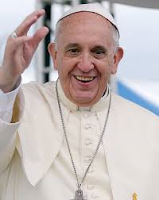 Since the release of Pope Francis’ encyclical letter “On Care For Our Common Home” there have been two primary commentaries.  One has been enthusiasm that the leader of the Catholic Church has placed climate change, and a concern for those suffering it’s affects, firmly within the realm of religious interest.  The other commentary boils down to variations on the theme of “who does the Pope think he is?”

I have no answer to that question, nor do I intend to pursue it.  However, the question does raise a more fundamental one: Does religion have a place within the dialogue around climate change?

At the heart of the question about the Pope’s ontology is the assertion that religion should have no place in the politics of climate change.  Therein lies the critical mistake.  Action on climate change is not a political debate.

Nor is climate change a scientific debate, or an economic one.  It is not an ethical or moral debate.  Placing climate change within any of these human domains is topsy-turvy.  Climate change embraces all of these domains; politics, religion, science, economics, ethics, morals, and more.  Each of these brings it’s own observations and understandings to the climate change dialogue.

Economics brings the financial constraints and opportunities that lie ahead and  seeks answers to questions such as: how much will this cost?  Can we afford it? Can we afford to do nothing?  Do we have the economic resources, and how are they to be distributed?

Politics brings the mechanism of public decision-making.  It brings together the competing interests and priorities from within the public, social and national fields.  Furthermore, climate change forces us to think politically at an international level.

Morals and Ethics bring a series of questions relating to how we should act, individually and socially.  Morals and ethics ask questions such as: what state should we leave the world in for future generations? what right do humans have to hold dominion over other sentient beings?

(Note.  I have distinguished morals and ethics from that of religion.  This is deliberate.  One does not need to be religiously inclined in order to have a strong moral and ethical compass.)

Who does the Pope think he is?  I guess he would answer that he is a religious leader.  Certainly, in terms of climate change he claims that:

“I would like to enter into dialogue with all people about our common home.”1

As a religious leader he must be welcomed to the dialogue.

1. Pope Francis, encyclical letter “On Care For Our Common Home,” 2015, para 3.
Disclaimer:  I am not, and never have been, a member of the Catholic Church.
Posted by bruce meder at 16:52