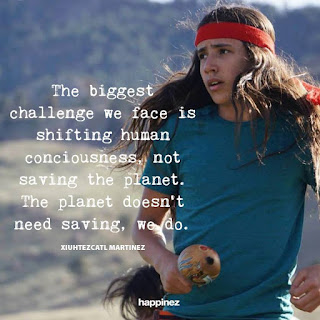 Homo Sapiens has undergone at least three major revolutions.  Some 10,000 years ago much of the
world witnessed the first of these – the Agrarian Revolution.  We humans moved from being nomads and wanderers, from being hunters and gathers, to become settled agriculturalists.

Then, beginning in Great Britain, and quickly spreading to Western Europe and North America in the late 18th and early 19th centuries the Industrial Revolution upset the established agricultural patterns.  We began to move off farms, away from rural lifestyles, and into cities and factories.

The 19th and 20th centuries saw many revolutions, yet the most significant occurred in the latter half of the 20th century, and exploded with the introduction of the world wide web in 1991 – the Information Revolution.

But information, data, facts and figures have not stemmed the onset of numerous global problems; climate change, war/terrorism, species extinction and many other inter-connected problems.

We need a Fourth Revolution.

Xiuhtezcatl Martinez (pictured above), still a teenager, has eloquently suggested what that revolution might entail.  Martinez is the youth director of Earth Guardians, an international movement hoping to wake the world up from it’s stupor.  Repeating themes that others (such as Krishnamurti, Vaclev Havel and Ervin Lazslo) have previously espoused, Martinez calls for a Consciousness Revolution.

Many of those studying the phenomenon of consciousness and those actively seeking a collective appreciation of consciousness note that for much of the human race there is a defeatist idea that we are “just along for the ride” with little control over our destiny.1  There are, however, signs that this is changing.  Many people are becoming conscious that the inter-connected crises are real and pose a threat.  That’s a start.

Building on the First Three

And to do that we need to listen.  We need a threefold listening process.  We must learn to listen to our heart and to our deepest inner selves.  This is at odds with placing our faith in leaders who, more often than not, wish to remain wedded to old notions of hierarchy and control.  Second, we must learn to listen to one another.  That is not as simple as listening to our spouse, parents or children.  It is learning to listen to the “stranger” - those who are different.  Plus, it is time that those of us in the older generations listened to the young, those like Xiuhtezcatl Martinez.  It is their future that we condemn by not doing so.

This listening challenges much of our current ways of thinking and behaving.  That is why it is a revolution – the Fourth Revolution.