Book of Forgiving: A Review 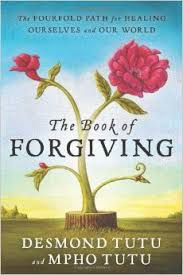 Of the hundreds, possibly thousands, of books that I have read in my life, The Book of Forgiving1 is one of the most beautiful, heartfelt and important of them.

Yet it is not so much a book that one reads.  It is more like a play.  Desmond and Mpho Tutu have scripted the play.  They are also the Director and Narrator and you, the reader, are the lead actor.  When you begin you are alone on centre stage.  Meanwhile, waiting in the wings are all those who have harmed you or those whom you have harmed.

The Tutus set scenes, give prompts, ask you to ad lib, and guide you on a journey through four Acts – what they call the Fourfold Forgiveness Cycle (Telling the Story, Naming the Hurt, Granting Forgiveness, Renewing or Releasing the Relationship).

This is a book in which the reader is a fully active participant.  It would be possible to read the book much as you would a text.  Some benefit, no doubt, would come from that; but by far the greater benefit comes from keeping the journal and undertaking the tasks that the Tutus provide for the reader at the end of each chapter.

Desmond Tutu is the Archbishop Emeritus of Cape Town and came to prominence as a vocal critic of apartheid in South Africa.  After Nelson Mandela became President of South Africa he asked Desmond Tutu to chair the Truth and Reconciliation Commission.  This role taught him much about the process of forgiveness and healing.

His daughter, Mpho, is an episcopal priest and is undertaking a doctorate in forgiveness.  She shares a very personal, and deeply moving, story in the book.  Together, the two of them bring a wealth of expertise, experience and insight to the journey of forgiveness.

They present all this in an engaging, easily accessible manner, including reference to research at times, giving the book a sense of being grounded.

Like any good play, this one begins with a prologue.  The prologue here is a description of what forgiveness is not.  Forgiveness is such a suppressed process and practice in western culture that it is easily misunderstood.  Desmond and Mpho Tutu wish to dispel five myths early so as to be able to move onto what forgiveness is.  For them; forgiveness is not a sign of weakness, it is not disregarding justice, it does not mean forgetting, it is not easy, and it is often not quick.

A number of stories are shared in the book that help to illustrate the points that the Tutus are making.  Many of these stories are brutally honest, sincerely respectful and deeply moving.  A word of caution: keep a box of tissues near at hand.

Read it, act it out and after forgiving others and yourself, take a bow.