Freedom was one of the major catch-cries of the 1960s.  Liberation was the name of the game: women's liberation, sexual freedom, civil rights.  The New World would appear before us once we were free.  A world of peace and equality was promised.

Out of the call for freedom and liberation arose the Human Potential Movement.  Individuals were overcoming their low self-esteem, realising their potential and creating their own world.

So why is it that rates of depression are on the rise in the western world?  Why is suicide one of the big killers amongst youth?  We have greater choice yet less satisfaction.  We can spend ages in supermarket aisles choosing between essentially the same items.  We complain that there are dozens of channels on TV yet there is “nothing to watch.”  Why? 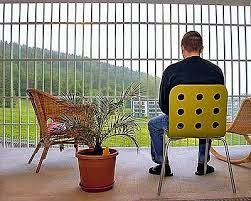 Did the promise of individual freedom only end in us having the freedom to build our own prison?
Oh, what a beautiful prison it is.  Instead of cell benches we have the latest designer lounge suites.  Instead of prison gruel we can taste exotic dishes from all over the world.  Instead of a bleak view from inside barred windows we can view the latest movie or watch a wildlife documentary at the click of a button.

Yet we are still trapped.  We are less connected with our fellow human beings than ever.  Oh sure, we have social media, we have instant connection via email, texting, iPhones and other such smart technology.  But, in general, individuals today have a smaller social network than they did a generation or two ago.

To escape this prison we need to break down the walls.  We may also need outside help, which is where those with a commitment to community development come in.  If we are isolated in our prison then community is the means by which we break out.

If community is the answer, what was the question?  Perhaps that is the single most important tool that a community developer or community educator has in their toolkit – questions.  Helping people to understand the power of questions is a crucial step towards breaking down those prison walls.

One powerful question to ask is this:  Does our freedom equate with having more choice?  Many commentators on inner freedom and happiness suggest that the pursuit of our desires may be the very thing that inhibits us obtaining freedom.  It seems that the more choice we have the less free we become.
Posted by bruce meder at 13:54