What Use Are Prisons? 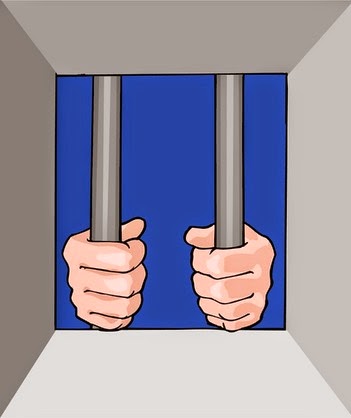 Prisons are built to contain criminals – right?  They are also built as a deterrent to crime – right?  In other words, if we build more prisons then the crime rate should drop – right?  But it doesn’t.

I recently obtained the incarceration rate and the crime index1 for a number of western nations.  I then plotted the results, shown in Graph 1 below. 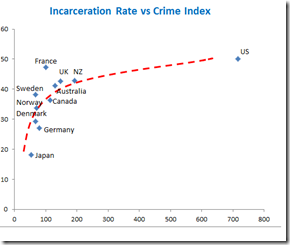 The horizontal axis indicates the number of people imprisoned per 100,000 of the population.  The vertical axis is the Crime Index.

There is a clear trend line indicating that a higher incarceration rate is commensurate with a higher Crime Index.  Way out to the right is the US, with one of the highest incarceration rates in the World.  The US may imprison people at a far greater rate than other western nations, but in doing so, it has not managed to reduce the incidence of crime at all.  If anything, US crime rates are higher than that of almost all other western nations.

Perhaps the inclusion of the US may skew things.  So, I plotted the same variables for 49 of the 50 US states.  I left Louisiana out of the mix because it was an obvious outlier (it has an incarceration rate more than double the second highest state – Alabama).2  Graph 2 shows the results. 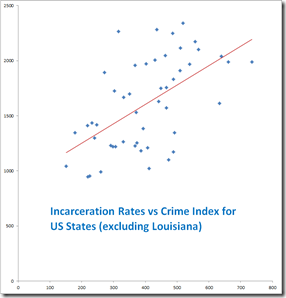 There is a trend line (albeit a weak one) that indicates a positive correlation between incarceration rates and the incidence of crime.

Some would say that these graphs show that because crime is high in some states or countries then that means that the incarceration rate is also high.  Others would argue a causality in the other direction; the more you imprison people, the greater will be the incidence of crime in that area.  There are numerous papers and theories on this, and I don’t intend trying to justify one or the other of these possibilities.

What does appear to be clear though, is that higher rates of imprisonment do not seem to deter crime.  Is there any other evidence for this assertion?  Figures for recidivism suggest that there is.

Comparing recidivism rates between nations is notoriously difficult, because of differing ways of measuring it.  However, some patterns do emerge.  Recidivism in the US runs at around 60-70%.  This is around twice the recidivism rates for other western nations, with Canada, Australia and Sweden all showing recidivism rates of around 35%.  Meanwhile, Norway claims a rate of less than 20%.

Meanwhile this all costs.  The cost of keeping a prisoner in jail for one year is around $40,000 in the US, $70,000 in the UK and over $100,000 in Australia.  Add to this the construction costs3 of prisons and we have an enormous amount of money going into a system that may not be working.

Who are the Prisoners?

One thing is clear throughout the western world is that those who end up in prison show very similar demographic backgrounds.  A prisoner is more likely to come from a poor socio-economic background, more likely to be unemployed at the time of imprisonment, and likely to have a low education level.

It is time to stop building prisons.  Its time to start building a society based on social justice.  Only then will we have the chance of seeing crime levels decline.

1. The Crime Index is an estimation of the level of crime in a country or state.  The index is computed using a range of crime figures.  See www.numbeo.com
2. Perhaps a reader in the US could enlighten me as to what is going on in Louisiana.  Not only is it’s incarceration rate massively higher than the other 49 states, it also has a murder rate double or more that of most other states.
3. Some recent examples of prison construction costs are:  Australia ($495 million), US ($400 million) and Canada ($569 million).
Posted by bruce meder at 08:36