The Age of Wars 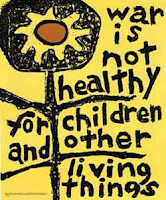 During World War 1 Hermann Hesse wrote that “…peace is nobler than war, this exactly is what this unholy World War should burn into our memories, more so than ever before.”  Following that war and as a protest against German militarism, Hesse moved to Switzerland in self-imposed exile where he lived until his death in 1962.

In his final, futuristic, book The Glass Bead Game1 he has his central character looking back on “the Age of Wars … which began with … the First World War.”

Well – it didn’t.  Wars did not end after 1918.  There was a slight hiatus during the following decade (the 1920s), but during those 100 years there was hardly a year that went past without a major war or armed conflict somewhere in the world.  The timeline below shows just a small proportion of the wars and armed conflicts that occurred from 1914 to 2013. 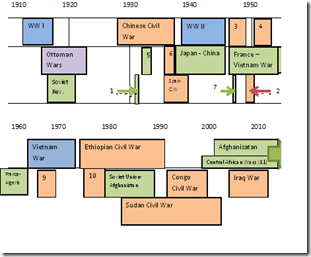 In a previous post I wondered whether we had learnt anything from history.  The graph below suggests that we may, finally, be turning the corner on our use of violence to solve political or social issues. Early in the century it appeared that the “war to end all wars” may have done just that.  The 1920s saw few wars and a much reduced number of deaths.  But it was short-lived.  In the following four decades well over 100 million people were killed as a result of war or other armed conflicts.  Those four decades saw some of the most horrific armed conflicts of the century – WW II, the Vietnam War, the Korean War, Stalin’s pogroms in the Soviet Union.

Have we learnt then?  Have we discovered that the use of violence in any form does not solve our socio-political issues?  Have we realised that violence only creates more violence?  Maybe.

There are, however, a couple of blips that stem the optimism of a peaceful future.

First, warfare is becoming depersonalised and remote with more and more innocents bearing the deadly cost.  The use of drones is but the latest example of this.  The proportion of civilians amongst the dead has increased dramatically.  At the beginning of the century 9% of armed conflict fatalities were civilians.  By the end of the century this had sadly risen to 90%.

The other blip is that the threat of violence seems greater.  Terrorism was rarely a part of our vocabulary until the latter half of the century.  It wasn’t until the first decade of the 21st Century that the “War on Terror” became one of the phrases of the decade.  Therein lies the danger ahead.  The idea that terrorism can be overcome by declaring war on it is seriously flawed.

Peter Ustinov has said that “Terrorism is the war of the poor.  War is the terrorism of the rich.” So true.  Violence by any other name will still be violence.

Was Hermann Hesse right to prophetically label it the Age of Wars?  Labelling it thus suggests that war is what distinguished the age, and that future ages would be peaceful in contrast.  Let us hope so.

Email ThisBlogThis!Share to TwitterShare to FacebookShare to Pinterest
Labels: Anti-War