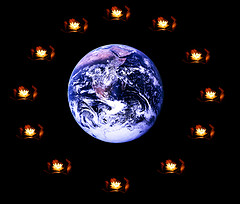 ...58, 59, 60.  That's it - that was Earth Hour 2013, the 6th occurrence of the world-wide dimming of the
lights.  For one hour many of the homes of the world, and over 7,000 towns and cities either turned off their lights, or switched to sustainable electricity sources.

For one hour we proved that it is possible to reduce our dependence on fossil fuels or nuclear energy in order to live a good life.  Advocates for Earth Hour suggest that we continue with such practice for the remainder of the year - the other 8,759 hours.

Those other 8,759 hours must surely become our goal.  The energy generation source for each and every one of those hours must become sustainable.

Indeed, once Earth Hour has proven the possibility, and sustainable energy has become a continuance phenomenon, maybe we could have an Un-Earth Hour.

For one hour a year we could burn as much coal, oil and gas as we wished.  We could drive recklessly around city streets for an hour burning up fuel as if we were all young boy-racers.  We could put on a massive light show for one hour, making the Earth glow enough for it to be noticed by Curiosity on Mars.

Yes, for one hour each year we could remind ourselves (and teach our children) of just how wasteful, thoughtless and selfish we used to be for 8,759 hours each year.
Posted by bruce meder at 20:18