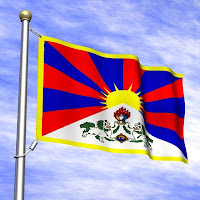 With the coming to power of the Communist party in China, Tibet was again invaded in 1950.  The Chinese forced Tibetan leaders to signing the “Seventeen Point Agreement” which provided for Tibetan autonomy and respect for Buddhism, yet ceding the establishment of Chinese civil and military headquarters in Llasa.  However, the Chinese failed to honour their part and in 1959 uprisings broke out.  Crack-downs and repression led eventually to the Dalai Lama (this time the 14th) fleeing to northern India.  He has not set foot in Tibet since.

Over the following 50 years Tibetans have had their culture and religion suppressed, their language repressed and monks and nuns forced to undergo “patriotic re-education.”  More than 6,000 monasteries and nunneries have been razed, photos of the Dalai Lama are banned, as is the Tibetan flag.

Tibet has undergone severe environmental damage with deforestation, desertification, resource depletion and the building of hundreds of hydro-electric dams flooding agricultural land and forcing thousands into resettlement.  Tibet has been the site of Chinese nuclear weapons testing and nuclear waste dumping.

With Tibetans becoming a minority in their own country1 it was little wonder that the 50th anniversary of the Dalai Lama being forced into exile would see an escalation in unrest.  Beginning in 2008 prior to the Beijing Olympic Games protest at Chinese occupation has continued unabated.  China’s promotion of it’s appointee of Panchen Lama (the second highest ranking Lama) in 2009 added fuel to the fire that had begun burning.

Self-immolation became an all too familiar symbol of protest since the first young monk (Tapey)set himself on fire in Januuary 2009.

Various organisations around the world attempt to bring the plight of Tibet and it’s people to our attention.  Here are just a couple:
https://www.studentsforafreetibet.org/
http://www.savetibet.org/