The Ehrlichs Warn Us Again 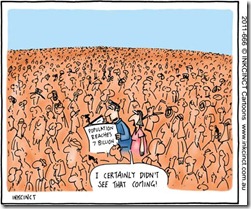 In 1968 when Paul and Anne Ehrlich wrote The Population Bomb there were 3.5 billion people on the earth.  Today, 45 years later there are twice that number and both Paul and Anne are in their 80s.

Notwithstanding their ages, they are both still writing and warning us of potential consequences of our “growth” mentality.

In 2012 Paul Ehrlich was elected to the fellowship of the Royal Society and marked the occasion by publishing (with his wife) a paper in January 2013 asking: Can a collapse of global civilisation be avoided?

As with their 1968 book and many other books and articles the Ehrlich's are again alerting humanity to face up to the damage that we are doing to our planet, its ecosystems and to ourselves.  Although a lot of the public face of environmental threats has been about climate change in this paper the Ehrlichs warn of other elements that could lead to collapse.  Amongst these they include:
Returning to a long-running theme of theirs, the Ehrlichs state that “No civilisation can avoid collapse if it fails to feed its population.”  Yet our agricultural practices, techniques and technologies have led us into a Catch 22 situation:.


“Agriculture itself is a major emitter of greenhouse gases and thus is an important cause of climate disruption as well as being exceptionally vulnerable to its consequences.”

However, food supply is not the only threat according to the Ehrlichs.  Global toxification, population growth, weakening of immune systems, rapid transportation and misuse of antibiotics all could contribute to world-wide epidemics.

Having lived through the horrors of Hiroshima/Nagasaki, the Cold War and now dangerous conflicts such as that between India and Pakistan it is little surprise that the Ehrlichs are also worried about the potential of collapse via nuclear warfare.

So, are the Ehrlichs hopeful of a positive answer to their question: Can a collapse of global civilisation be avoided?

Their guarded answer is yes.  They recognise that humanity does have the capacity and the assets needed, but unfortunately “the risks are clearly not obvious to most people.”

Thus, yet another warning is issued to humanity by two of the world’s leading biologists.  When will we sit up and take notice this time?