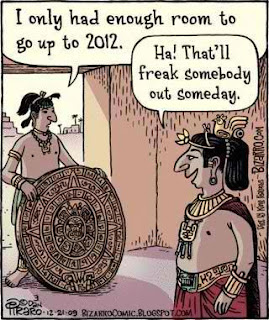 We have less than two months.  At least that is what the doomsayers say about the coming end of the Mayan calendar.  Just four days before Christmas this year a 5,125 year long Mayan calendar cycle comes to an end.

Some predict that this heralds the end of the world.  Others say that it means that humanity will undergo a spiritual transformation.

The systems thinker, Ervin Laszlo, has used the date as a reference point to the crossroads at which humanity presently stands.  His view is that we are in a period of transition.  Transition to what?  Reflecting the conflicting predictions of the Mayan calendar believers, Laszlo suggests that we face one of two scenarios; breakdown or breakthrough.

We could breakdown and experience catastrophic natural disasters, wide-spread famines, rampant global pandemics, lingering droughts, severe flooding, serious water shortages, increasing distrust and anger.  All of which could fuel resource wars and acts of global terrorism.  In short, a breakdown of any semblance of human decency and order on a grand scale.

Or, suggests Laszlo, we could breakthrough and realise a humanity based on greater compassion, respect and mutual cooperation.  Concurrent with greater social cohesion and well-being would also come a desire for equitable, sustainable practises that would slow, halt and, eventually, turn back the detrimental effects of our growth-at-all-costs mentality of the past few centuries.

To Laszlo and others the end of the Mayan calendar could be a wake-up call that we humans need to hear.

So too could hurricanes such as Superstorm Sandy currently making headlines around the world.  Although Hurricane Sandy is a weather system and cannot be thought of as climatic in nature, many climate scientists find it difficult to track the connections between climate change and specific weather patterns, but acknowledge a link

In order for an hurricane (along with typhoons and cyclones) to form, the sea surface temperature must be warm.  Over the past few decades sea surface temperature has increased and in that time the annual number of intense storms (category 4 and 5) has nearly doubled.  Not only has the number doubled but they also make up a much larger share of all categories of storm.  In short, storms are getting more intense and bigger.

A Role for Community Development

If community development workers haven’t heard or understood the thinking behind the phrase “think global, act local”, now is a time to do so.

It is time for community development workers to actively become community educators also.

Can we do it?  Can we breakthrough rather than breakdown?  Have we passed the tipping point?
Who can tell?  I’m reminded of the Chinese diplomat who, when asked what he thought of the French revolution, responded with “hmmm… too early to tell.”

It may be too early to tell.  It may (pessimistically) be too late to alter the outcome.