Social Justice as a concept covers a range of issues; economic, gender, race, identity and freedom from violence to name just a few.  Hence, it is difficult to pick out just five campaigners to highlight here.  Those that I have highlighted are by no means the most important or the most effective or any other form of “most”.  They are simply five that I have found inspiring.

You’ll notice too, that all of them are women.  I do intend posting a secondary listing at a later date of 5 More Inspiring Social Justice Campaigners who happen to be men.

In the meantime here are five women who have been an inspiration to many.  A couple of them are well known and a couple less well known, especially within the Western world.

This 27 year old Egyptian woman is possibly not well known in the West.  But the movement she began certainly is.  In January 2011, tired of the way in which the Egyptian people were being victimised by Mubarak, Asmaa posted a video on Facebook saying that she was going to protest in Tahrir Square.  She and four others did so and were surrounded by security forces and moved away.

This time her video got uploaded to YouTube and went viral.  The next time she went to Tahrir Square there wasn’t just her and four others – there were thousands and thousands of people.  The Arab Spring had begun.

The video that began it all

By now the Burmese Nobel Peace Prize recipient and leader of the Burmese pro-democracy movement is well known because of the movie “The Lady.”  The 2011 movie tracks the life of Suu Kyi in her campaign to end the brutal military dictatorship that had ruled Burma for decades.

Suu Kyi’s father was Aung San, considered to be the father of modern Burma, who was assassinated when Suu Kyi was just 2 years old in 1948.

In 1988 Suu Kyi returned to Burma, to care for her ailing mother, after studying at Oxford University and marrying a British academic.  She soon became involved with the National League for Democracy.

In April 2012 Suu Kyi and other members of the National League for Democracy won parliamentary seats although her struggle for democracy within Burma still persists.

Although she was awarded the Nobel Peace Prize in 1991 it was not until June 2012 that she was finally able to deliver her acceptance speech.  One of her most famous quotes is:

Feminism without Germaine Greer is as hard to imagine as Cubism without Picasso or Rock n’ Roll without Elvis Presley.  Greer was at the forefront of the resurgent feminist movement of the 1970s and her book “The Female Eunuch” (1970) became a feminist classic.

Born in Australia in 1939 Greer courted controversy from a very young age and continues to do so today at almost 74 years of age.  With a highly academic background (her PhD is in Elizabethan drama) Greer has lectured in Coventry, Oklahoma and Cambridge. 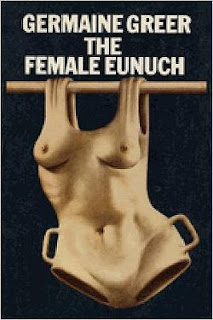 But it was her book, “The Female Eunuch”, that thrust Greer into the headlines.  The central theme was that society and in particular the nuclear family represses women sexually thus rendering women as eunuchs. Furthermore, she asserted that women were taught to be submissive and so considered themselves as inferior to men.  From today's perspective these sound rather exaggerated ideas, but in the 1970s the claims resounded with thousands of women (and some men).

Much of her thought was informed by Marxism and anarchism (and Greer openly states this) and so although she espoused many freedoms she was wary of institutionalising those freedoms.  In a television interview just four years ago she stated that she


“believe(d) in permanent revolution. I believe that once you change the power structure and you get an oligarchy that is trying to keep itself in power, you have all the illiberal features of the previous regime. What has to keep on happening is a constant process of criticism, renewal, protest and so forth.”

If Dame Whina Cooper is known at all outside her native Aotearoa (New Zealand) it is as the figurehead of the large Maori Land March (hikoi) that marched the length of the North Island in 1975 to protest the continued theft of land.  By the time the marching protesters arrived at Parliament Buildings in Wellington the 80 year-old Cooper had 5,000 marchers behind her.  There, on the steps of Parliament she handed a petition signed by 60,000 people to the New Zealand Prime Minister.

But Dame Whina Cooper was well known within Maoridom well before this.  In 1951 she helped found and became the first president of the Maori Women’s Welfare League, a highly influential and successful organisation that improved the conditions of Maori everywhere, especially those caught in the rural-urban drift trap..  When she stepped down from the presidency she was awarded with the title of Te Whaea o te Motu (Mother of the Nation).  She continued to work for the benefit of Maori people at a more local level until her calling in 1975 to lead the Land March.

Although Dame Whina Cooper’s work focused on the conditions for Maori she became widely respected within New Zealand society and was given the honour of opening the Commonwealth Games in Auckland in 1990.  When she died in 1994 over a million people watched the live broadcast of her tangihanga (funeral) on television.

December 1st, 1955 was a turning point in the history of the American Civil Rights movement.  On that day in Montgomery a 42 year old African-American boarded bus number 2857 and sat down in the coloured section.  When a white passenger boarded she refused the bus driver’s order that she give up her seat in the coloured section because the white section was full.  Rosa Parks was arrested.

It wasn’t the first time that buses and discrimination had played a part in Parks’ life.  As a child she and other black students had to walk to school whilst white students took the bus.  As she recalled:

“I’d see the bus pass by every day… the bus was among the first ways I realised there was a black world and a white world.”


In 1943 she boarded a bus, paid her fare and then had to get off the bus and move to the back to enter via the rear door because there were white people sitting in the front of the bus and she was not permitted to pass them by.  As she walked to the rear of the bus, the driver drove off leaving her to walk home in the rain.  Ironically it was the same driver that ordered her arrest on that day in December 1955.

On 5 December 1955 Parks was tried on charges of disorderly conduct and violating a local ordinance.  The day before, a Sunday, 35,000 handbills were printed and distributed and black churches in the area announced plans for a Montgomery Bus Boycott.  Even though the day of the boycott was wet, African-Americans continued with the boycott and maintained it for 381 days.With dozens of buses sitting idle and the transit company’s finances being severely hit the city finally repealed its public transport segregation laws.
﻿
The Montgomery Bus Boycott, sparked by Rosa Parks refusal to submit to racial discrimination itself became one of the sparks that ignited the Civil Rights Movement in the US.

In her autobiography Rosa Parks refutes the allegation that she refused to move for the more mundane reason that she was “tired”.


“I was not tired physically, or no more tired than I usually was at the end of a working day. I was not old, although some people have an image of me as being old then. I was forty-two. No, the only tired I was, was tired of giving in.”