Not only can bureaucracies not control outcomes or processes of community development, nor should they even be wanting to do so.  I’ll come back to that in Part 2.

Why can’t we control the process or outcomes?  It’s simple really: it’s complex!  Now if that sounds like an oxymoron, perhaps it is, but let me explain.

How We Thought of the World
Since the days of Descartes, Galileo, Newton and other pioneers of the Scientific Revolution and the Age of Enlightenment in the 17th and 18th Centuries, Western society had come to think in terms of linearity, cause followed by effect, parts and fragmentation.  Although this began within scientific arenas the ideas and thinking quickly established themselves within other spheres as well: political, economic, managerial and even social.  A mechanistic, technological model of society emerged and found it’s zenith in the 20th Century.

Even social justice and social change agents were not immune to this way of thinking – this paradigm.  For the first half of the 20th Century one of the catch-cries of social activists was “the ends justifies the means”.  A classic example of linear thinking.  Even later, when this was challenged, particularly by the new feminist movement, it was merely suggested that “the means have to be in harmony with the ends”.  Still maintaining the idea that cause gave rise to effect.

Not until the latter part of the 20th Century did ideas about systems theory, feedback, non-linearity and complexity start to get noticed by some within the movements for social change.

To come back to my question then:  why can’t we control processes and outcomes?  Complexity theory provides an answer.

Complexity theory arose during the early 1960s when Edward Lorenz, a meteorologist, tried to speed up the computation of a weather modelling programme he was running on a computer.  The computer stored data to 6 decimal places, but printed out the numbers to only 3 decimal places.  Lorenz decided to re-run a model part way through and typed in the initial data to those 3 decimal places.  Coming back later Lorenz was astounded to find that the model, although initially closely resembling the earlier outcome, now had widely diverged from it and was fluctuating wildly.  How could this be, pondered Lorenz?  Small differences in initial conditions should cause only small differences in outcome, according to the prevailing paradigm of the time. 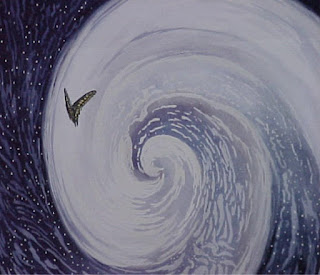 To try to explain this an analogy known as the “butterfly effect” is often used.  This analogy suggests that a butterfly fluttering it’s wings in the Amazon jungle could trigger a thunderstorm over Tokyo.

Within the mechanistic paradigm was the principle that acquiring knowledge meant that we could understand order and hence we could also control and predict outcomes based on our understanding of the underlying order.  However, complexity undermined that way of thinking in a profound way.  No longer could we think of things being orderly; some, indeed many, were chaotic.  Although this chaotic world could be partially modelled and predicted there was no certainty.  Although most chaotic systems have boundaries, within those boundaries it was no longer possible to predict accurate outcomes.  Of course, it has to be said that many other traditions and cultures were aware of this "way of the world" centuries earlier.  Unfortunately, it has been the Western viewpoint that has tended to dominate over the past couple of Centuries.
Relationships are Complex

Ah, but that’s all just theory, only applicable to weather patterns, fluid dynamics, genetics and quantum physics.  Human society isn’t like that.  Isn’t it?  Here’s a quick example.

But the nuclear family we know is not that contained.  What if the grandparents come for a visit, say at Christmas time.  Now there are eight people in the house.  How many relationships are there now?  You could try drawing the possibilities, or if you’re mathematically inclined you could work with permutations.  Whatever you do, you’ll find that there are 301 possible relationships.  OK, that’s getting a bit harder to control – perhaps that’s why there are sometimes fractions at Christmas time!

What if we double the number of people involved from eight to sixteen.  Many community groups can think of examples were there are this many people in a group:  the older persons outing, the weekly Mums and Tots group, the yoga class, there are many examples.  Anyway, with those sixteen people, how many potential relationships are there?  Would you believe that it’s close to 80,000!!!!  Staggering isn’t it?  No wonder society and communities are complex.

That’s why bureaucracies cannot control the outcome or the process of community development – they’re dealing with relationships, psychologies, mindsets, aspirations, fears and behaviours of people.  The sadness is that many bureaucracies are still trying to operate within a mechanistic, deterministic model of the World.

But, there is a place for bureaucracies.  It does require a re-thinking of their role though.  That’s for Part 2.