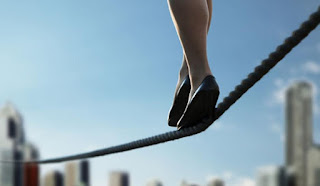 Sometimes our psychology gets in the way of what is in our best interests.  We are prone to giving our attention to what is immediate in time and space.  Events or situations that are in the long-term future or on the other side of the world can be put out of mind and ignored.  Yet, these events and situations may be of greater importance (positive or negative) to us.  We may be ignoring them at our peril.

What do I mean?

In the ground-breaking study – Limits to Growth1 – published in 1972, the authors understood this to be a crucial factor in how we approach environmental and social issues.  So much so, that they addressed it early in the book, with a figure similar to that below being the first in the book. 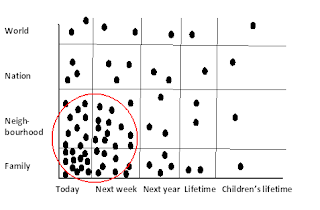 In the figure they plotted the level of concern people had for an event or situation dependent upon how close in time and space it was to them.  As can be seen, there is a concentrated cluster in the bottom left with levels of concern becoming less further away.

Another factor in terms of our level of concern is that we are less concerned about something if it takes a long time to play out, and highly concerned if the duration is short lived.  A graph such as that below illustrates this. 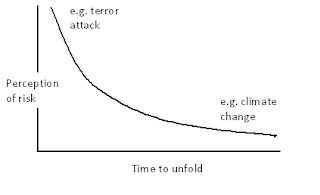 When Limits to Growth was published the terms and concepts of climate change and terrorism were almost unheard of.  Global warming was just beginning to be talked about.  Terror attacks in Europe were still low, although they spiked in the late 1970s through groups like the Irish based IRA, the Basque ETA and the Italian Red Brigade.

Climate change and terrorism are very good examples of the psychology mentioned here.  Climate change seems to many to be a series of events to come (in the future) and for many the consequences are seen in other parts of the world (from our TV screens.)  Climate change is also something that evolves over a number of years.  Terrorism, however, is an immediate event.  One minute all is normal and serene.  The next moment, a bomb explodes, or a truck slams into a crowd, and all is chaos, carnage, screams and pain.

Today, terrorism is viewed as a massive threat and nations around the world are acting (and spending huge amounts of money) to reduce the risks.

Yet, we may ask: what is the risk?

We know what happened in 2001 though.  The US was the victim of a terror attack and suddenly terrorism is seen as a major threat on the world stage.  No wonder really.  The US is the home of six of the largest news media outlets in the world.  And, as the saying goes: if the US sneezes, the rest of the world gets a cold.

The risk is low, yet the perception of risk is high.

Climate change, on the other hand, is often perceived as being something that takes place over a long time frame and will happen in the future.  The catastrophe here is that this perception increases the risk, rather than reducing it.  In the late 1980s NASA scientist, James Hansen, warned that the earth could be approaching  a tipping point in its climate, and spoke of a need to reduce carbon in the atmosphere to 350 parts per million (ppm).  Three weeks ago (5 March 2018) Mauna Loa Observatory in Hawaii announced that the amount of carbon in the earth’s atmosphere reached 408.35 ppm in February.

The risk is high, yet the perception of risk is low.

The message from these two examples is that we need to become aware of how our perception of risk and actual risk can be skewed.  That skewering is the real risk.