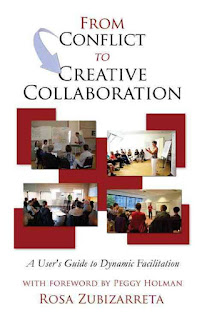 What would a conference, workshop, or meeting look like if the understandings of complexity and chaos theories ruled?  Perhaps they would look like the meetings Rosa Zubizarreta describes  in From Conflict to Creative Collaboration.  Instead of meetings being brought to a focus point and a decision point, such meetings would widen things and would be choice-creating.  Instead of consensus, these meetings would seek diversity.

So, what is it?  What is Dynamic Facilitation?

It all sounds chaotic doesn’t it?  it is, and that is its beauty and its strength.

The world does not work in a nice, orderly, linear manner, and nor do our thinking patterns.  At times we will be solving problems and creating solutions, at other times attempting to define the problem, sometimes even when we think we have solved it.  In the next moment we may be recognising the disadvantages and pitfalls of a certain solution, and then we will be seeking further information.  Throw all these thinking patterns into a group setting and it becomes obvious that thinking, decision-making, and problem-solving, are not necessarily as ordered as we might like them to be.  The cautionary tale in all this is that when someone, or some group, attempts to constrain thinking within ordered, linear, so-called logical, patterns, then unexpected or unwanted outcomes emerge.  We may find that some in the group are disgruntled, others withdrawn, some angry and disillusioned, and yet others outright saboteurs.

Dynamic Facilitation, in the manner well presented by Rosa Zubizarreta, understands and works with the non-linearity of our thinking patterns.  Dynamic Facilitation says it doesn’t matter if one thought or expression doesn’t logically follow another – just get it down, record it.

All this is in keeping with emergence – the child of complexity and chaos theories.  Emergence tells us that when a number of factors, players, or ideas come together then sometimes unexpected, even unexplained, outcomes can emerge.  Often, these outcomes are highly creative.


As a bonus there is a foreword by Peggy Holman who has written much about the power of emergence.  This foreword lays out neatly what the reader can expect over the following 100 pages.
Posted by bruce meder at 09:22