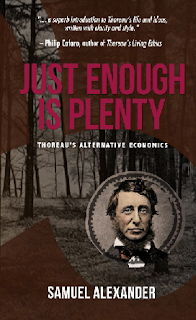 In my early twenties I came across Henry David Thoreau and attempted to read Walden.  I admit I struggled.  If only Just Enough Is Plenty was available then I am sure Thoreau’s concepts would have been much easier to grasp.  Samuel Alexander has written an excellent introduction to Thoreau’s works.  Just Enough Is Plenty: Thoreau’s Alternative Economics not only summarises Thoreau’s ideas it is also a pithy statement of Alexander’s work itself: it is short, concise, and adequately explains the work of the nineteenth century forerunner of the simplicity movement.  Just Enough Is Plenty does not take long to read – it comprises less than 50 pages, and is only one-fifth the length of Walden itself.

I don’t know whether Samuel Alexander intended this or not, but this year (2017) is the 200th anniversary of the birth of Henry David Thoreau.  Undoubtedly there will be a number of articles, essays, and perhaps books celebrating that this coming year.  Alexander has beaten them all to it and his contribution will be hard to beat.

Henry David Thoreau was born in Massachusetts and graduated from Harvard in 1837.  He aspired to be a poet but found that poetry was unlikely to provide him with sufficient income to live on.  Like many poets, Thoreau questioned life and its meaning.  Importantly, for his later writings, he asked, “How much do I need to live well and to be free? “  The answer to this question was to be pivotal in Thoreau’s writings and is the one that Alexander takes as the basis for his book.

After a stint of teaching and some unfulfilling jobs as labourer, pencil-maker, gardener, tutor, and editor, Thoreau left his hometown of Concord and went to live in the woods.  There he built a cabin, planted crops, fished, pondered for hours on end, and wrote his classic Walden.

Walden is a poetic, metaphor-filled, examination of what it means to be free, and what it costs in order to obtain that freedom.  Thoreau’s answer was that it doesn’t cost as much as we think it does.  With all those metaphors and poetic writing it is little wonder that as a young man I struggled to grasp Thoreau’s meanings.  Alexander makes it all so clear and he is to be thanked for enabling the depth and enormity of Thoreau’s work to be so accessible.


“(Thoreau) was not interested in giving us detailed instructions on how to live a simpler life; nor did he want to save us the trouble of thinking for ourselves.  Rather, he wanted to stoke the fire in our souls and inspire us with ideals.”

If Thoreau’s intent was to inspire us with ideals, then it is Alexander’s intent to inspire us to read and understand Thoreau.  He has done this superbly – I now intend to read Walden sometime in this 200th anniversary of his birth.

Alexander has not just left us with a string of ideals however.  He clarifies Thoreau’s thoughts on: work, money, how much is really necessary, what is a comfort, luxury or a necessity, the role of technology (hint: not all technology, according to Thoreau or Alexander, is appropriate), and what is the meaning of our lives.

It is to the final point that Thoreau, as an innate, and possibly stifled, poet often returns.  Alexander quotes Nietzsche’s dictum to “Be the poet of your life,” suggesting that it would have been a phrase with which Thoreau would have been entirely comfortable.  Alexander notes that Thoreau was not simply attempting to find a simpler way of living, he was keen to answer the question: enough for what?  This question was relevant to Thoreau in nineteenth century Massachusetts.  It is just as vital, perhaps moreso, in the twenty-first century.  Two centuries later we find ourselves not only wishing to find a personal answer to the question of what for?  We also find ourselves having to answer the question of how much is enough? for the sustainability of the whole planet.

Alexanders, and undoubtedly Thoreau’s, answer to that second question: Just Enough Is Plenty.
The book can be obtained here either as a paperback or a “pay as you want” PDF.
Posted by bruce meder at 10:35