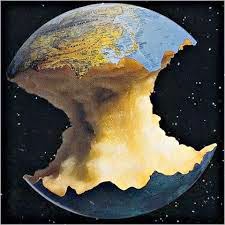 We’ve done it again.  Every year since the mid 1960s we have done it.  We have overshot.  We have taken more than we have given.

In the next day or so (posted on 18 August 2014) we will exceed the earth’s capacity to rejuvenate or replenish what we have used up since the first of January.  Overshoot Day is a symbolic day that indicates the rate at which we use up the earth’s resources without the earth being able to replenish that use.

It’s a bit like getting your year’s salary on 1 January and then exhausting it by 20 August.  From the 21st of August you go into overdraft.

What’s more – we’ve been going into overdraft at an earlier and earlier date each year (see table at right).  In the early 1960s we never reached overdraft, in fact, metaphorically, we were able to save a little.  But, since then, we have rapidly expended our biocapable income.  We have spent without a thought given to those to come.  Rather like spending the inheritance that we had planned for our children or grandchildren.

Collapse may come even earlier than in our grandchildren's era.  We may be in for a terrible shock sooner than we think.  Looking around on the surface it is easy to lull ourselves into a false sense of security.  The earth still provides – doesn’t it?  There are plenty of resources still to be used and found – aren’t there?

Systems don’t work quite like that though.  Have a look at this graph: 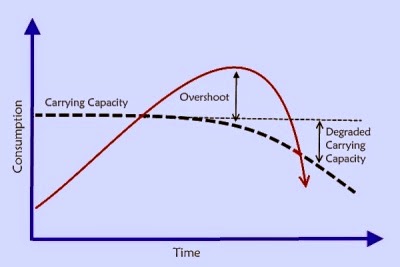 Eventually, however, resources and renewables become exhausted and consumption peaks and then drops rapidly.  The earth, and us with it, collapse.  Its all simple systems analysis.

Instead of continuing to strive for growth we must withdraw from continued high rates of consumerism.  We must once again become stewards.  We must act as guardians of our planet.  In short we must act response-ably.

In the coming years we must be seeking ways to ensure that overshoot day falls later and later in the year.
Posted by bruce meder at 20:26