Will Gaia Throw A Party? 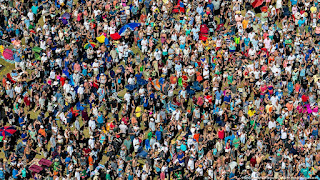 Sometime on the afternoon of 15 November 2022 (GMT) a baby was born somewhere in the world.
That baby became the 8 billionth person upon this planet.

There are now as many people alive upon the Earth as the total cumulative number of humans to have ever lived during the first 150,000 years of human (Homo sapiens) existence.

It took virtually all the time we have existed upon this planet to reach the first one billion living human beings. We did so in 1804 – slightly over 200 years ago.

We then rapidly populated the Earth, adding the next six billion to reach seven billion around late 2011-early 2012.

Then, in a little more than a decade we added one billion people. One decade! It had taken us most of 200,000 years to reach our first one billion.

Do you think Gaia1 will throw a party to celebrate?

Let’s look at some of the things we humans did on that day (the day on which the 8 billionth human arrived) to acknowledge the birth. Note: these figures are just one days worth.

Somehow, I don’t think Gaia is going to invite us to a birthday party anytime soon.

1. Gaia is the personification of the Earth in Greek mythology. Gaia is also the name James Lovelock gave to his hypothesis that the Earth acts as a superorganism and is a dynamical system regulating the biosphere and maintaining life.