We Need To Talk About Pat 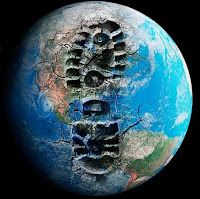 In the wake of the controversial film Planet of the Humans we are beginning to have conversations we need to have.  The film has received praise and condemnation alike, and everything in between.  No matter whether you are wont to praise or condemn, it must be acknowledged that it has got us talking (albeit primarily online.)

It has got us talking about Pat.

Pat?  Who’s Pat?  There’s no mention of anyone called Pat in the film.

The Pat I’m referring to is not a person.  Pat is the right hand side of the equation I = PAT.

Anyone remember this equation?  It was devised during the 1970s, and along with the phrase “Zero Growth” from the same era, became a fairly influential part of the environmental conversation of the time.  Sadly, since then, both the equation and the phrase have been largely forgotten or ignored.

The equation?  I represents our human Impact upon the Earth.  P stands for Population, A for Affluence (consumption levels), and T for Technology.  More accurately the equation is written as I = f{P, A, T} indicating that Impact is a function of the inter-connected factors of Population, Affluence, and Technology.

Although it is not an equation that can give us a perfect and discrete solution, it does give us a way of thinking about our Impact in a way that makes sense and is easy to understand.  It is also possible to use it in a crude mathematical way (as follows.)

How Have We Done?

(where ΔI and ΔT are the change in Impact and Technological innovation respectively.)  This gives:

So far, so good?  What of the other two variables: ΔI and ΔT?

(A quick aside: We can take something positive from this.  For technological innovations to have a moderating effect upon population and consumption growth, then ΔT must be less than 1.00.  It is – so that’s good.)

However, what if we were keen to have limited our Impact to not changing between 1990 and now?  In that case, the equation would look like this:

This is much less than 0.67.  One way to interpret this is that our technological innovations are no-where near the effectiveness and/or efficiency levels that they need to be, if our intent is to return to 1990 levels.

We need to talk about PAT.

Specifically, we need to talk about the P and A factors, as clearly, our technological innovations are not keeping up with population and consumption increases.

Now, what if our technological innovation effectiveness/efficiency remains as 0.67?  Then ΔI = 1.16.  A further 16% increase in our Impact.  It’s starting to look dire.

If we wish to have no further impact upon Earth (and population and consumption per capita remain the same) then our technological innovation rate would have to reduce from 0.67 to 0.58 (1/1.72)

But, we don’t just need to keep our Impact at today’s level, it needs to return to 1990 levels (or even earlier.1)  For that to happen the equation needs to look something like this:

This figure (0.23) is hugely, massively, less than the figure of 0.67 that we have managed over the past thirty years.

Remember that all these calculations are rough, imperfect, and back-of-the-envelope ones.  However, what they do show is the extent of the problem.  Our technological innovations (although partially effective) are just not going to be anywhere near sufficient enough to not only halt our Impact, but to reduce it to 1990 levels.  Nor are they likely to become so.

The message from this?

Technology is not going to save us.

We must talk about our consumption.

We must talk about Zero Growth.

Note:
1. The last time that our ecological deficit was zero was in the late 1960s, so there is some argument to suggest that we really need to be getting our Impact back to the late 1960s, which of course means the need to look into our consumption levels is even more urgent.