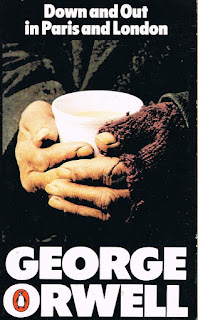 In the late 1920s a young man tramped around the streets of London and Paris – where he fell ill and was robbed.  Becoming destitute he took a series of dishwashing jobs and immersed himself in the downtrodden life of Paris.  Five years later this young man published a novel based on his experiences.  The young man’s name was Eric Blair, although most of us will recognise him more by his pen name – George Orwell.  The novel he published became one of the English language classics – Down and Out in Paris and London.1

Whether Orwell knew the word empathy at the time is uncertain – the word had only entered the English language twenty years before.   However, during his tramps around London and living a destitute life Orwell certainly came to understand the life of those on the margins of society and was able to identify with how they felt and behaved.  In short, his experience enabled him to empathise.

Not all of us will have the chance to experience what Orwell did and thus enhance our empathy.  Perhaps we don’t need to.  Maybe reading his novel and others could help expand our empathy.

Research in 20132 showed that following the reading of fiction the reader’s ability to “infer and understand other people’s thoughts and emotions increased.”  But it wasn’t just any sort of reading that did this.  The results following the reading of non-fiction or popular fiction ranged from unimpressive to insignificant.  It was literary fiction that made the difference.

What’s the difference between popular and literary fiction?  Popular fiction tends to be exciting and has a wide range of emotional responses.  Within popular fiction the characters are often stereotyped and their responses tend to be consistent and predictable.  Literary fiction, on the other hand, more often gets “into the head” of it’s characters, with the reader having to imagine more and discover for themselves the psychology of the characters and the relationships they have.  The reader of literary fiction has to take on the mind of the novel’s characters.  The reader must empathise.

Literary fiction often takes the reader on new, often unexpected, journeys of the mind.  It disrupts, undermines, and challenges the reader’s ideas, prejudices and notions of other people.  It helps the reader to understand people who are different in some way.

Why is any of this important for social change?

The Egyptian novelist, Alaa Al Aswany,4 has an answer to this question.  Aswany was also a prominent character in the 2011 Tahrir Square demonstrations that heralded the beginning of the Arab Spring.  When asked about social change and his writing, Aswany had this to say:

Aswany first noted the power of the novel to enhance his empathy when he read Fyodor Dostoevsky’s The House of the Dead.  In that novel Dostoevsky describes a scene in which a prisoner, lies dying.  Another prisoner stands by his bed and begins to cry.  A soldier/guard stands nearby watching the crying prisoner.  The prisoner turns to the soldier and simply says: “He, also, had a mother.”

In that simple sentence, and especially with the word also, Aswany says that he recognised and understood that although the dying man was a criminal, although he was not useful to society, he also had a mother like all of us.  Aswany goes on the say:


“We should understand that people are not bad, but they can do bad things under particular circumstances…. Literature is not a tool of judgment – it’s a tool for human understanding.”

Roman Krznaric has researched and written a lot about empathy.  He is the founder of the world’s first Empathy Museum.  He is also a fan of George Orwell and his novel, Down and Out in Paris and London.  Krznaric  has put together a list of 6 Habits of Highly Empathic People, one of which is to inspire mass action and social change.

As this blog began with George Orwell, it is appropriate for it to end with a quote from Krznaric, perhaps the world’s foremost thinker on empathy, describing how he links empathy and social change in the novels of Orwell.


“The traditional way to think about social change is about changing political institutions – new laws, new policies, overthrowing governments and so on. I think social change is actually about creating a revolution of human relationships. About changing the way people treat each other on an everyday basis. That’s what Orwell was learning about. He was talking to individuals – understanding the minutiae of their lives – and after his time living in the streets of London he went on to do journalistic work which was really about trying to connect with human lives.”

It may be tempting to think that it is possible to forego reading a novel and watching the movie instead and still gain the benefit of enhanced empathy.  Be warned – it may not be so.  Certainly, some movies can evoke an empathic response, a la the lyrics from the 1961 song: sad movies always make me cry.

The advantage of novels however, is that the internal dialogue of characters is embedded within the novel.  Internal dialogue can often get lost in a movie, however, with the attention of the viewer being distracted by special effects, big-name actors, or the scene setting.

Movies may have some impact on our empathy, but television can have a negative effect.  Research involving pre-schoolers in 2013 found that pre-schoolers who are exposed to more TV than others have a “weaker understanding of other people’s beliefs and desires, and reduced cognitive development.”5

5. Quoted in www.psychologytoday.com/blog/the-athletes-way/201412/can-reading-fictional-story-make-you-more-empathetic, accessed 24 May 2016
Posted by bruce meder at 18:13