Walk a mile in another person’s shoes.  A piece of counsel often heard.  It’s origin is uncertain, although there is an old aphorism of the Sioux:


"Oh Great Spirit, grant me the wisdom to walk in another's moccasins before I criticize or pass judgement."

As well as the advice to reflect before passing judgement it can also suggest recognising our differing perspectives.  Another analogy for discovering different perspectives is The Wave.1

The Wave is a useful tool for introducing discussion about differing perspectives and getting us to recognise that where we stand makes a difference on how we perceive issues.  As such it is an handy tool in the toolbox of people working in community education or community development.

In the diagram (Diag 1) below we see four people.  One in a boat, one on shore, one standing on top of a hill overlooking the sea and one on the other side of the hill.  A wave is about to crash over the boat.  What perspective do each of these four people have on this situation? 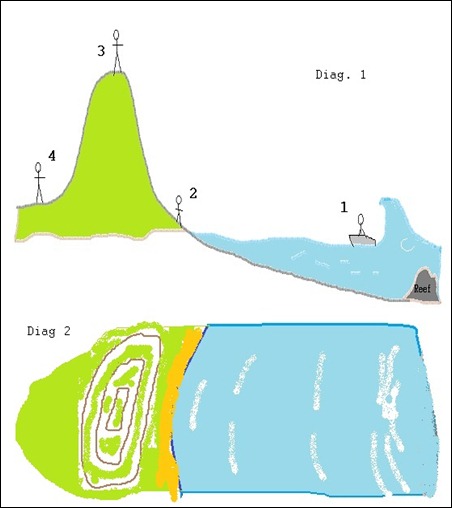 For the person in the boat (1) the situation is critical and immanent.  In order for this person to deal with the situation they must understand a number of factors: the dynamics of waves, where to place their boat in relation to the wave and how the wave is formed in the first place.

The person on the shore (2) is able to look out and see that the person in the boat is shortly going to be in an awkward situation.  If the boat is swamped this person may be able to swim out to rescue the person from the boat or perhaps raise the alarm.  Maybe they even suggested earlier that the person in the boat not attempt to pass through the wave, or gave them advice as to how to do so safely.  However, at this moment, watching from shore, although they can see what is happening, they have little influence upon the situation.

Standing atop the overlooking hill this person (3) gazes out to sea and perhaps thinks to themselves “what a lovely pattern the breaking waves are making” (diag. 2 shows an aerial view).  If they see the boat at all, because of distance they may not understand that the person in the boat is in any danger.  On the other hand, however, because they can see the bigger picture they may be better placed to see the specific location of the reef and maybe even gaps in the reef through which the boat may be able to pass safely.  Equipped with this knowledge though it is of little use if it is not translated to the person in the boat.  At some stage the hilltop sightseer must descend at least as far as the shore.

Meanwhile, behind the hill this person (4) has no direct knowledge of the wave and in response to news may even reply with “what wave?”  It may be to our peril to ignore them though - perhaps they are a boat designer or a meteorologist.

This tool is a handy one because it allows us to:
The Sioux were wise when uttering the aphorism that began this post.  All of the people in the wave analogy have differing perspectives and if we wish to understand the perspective of another then we may need to put on their moccasins and walk to where they are standing.  Together, both may then walk to an entirely different spot and view the issue through another perspective.

However, let us not forget that in the analogy above it is the person in the boat who is most at risk of suffering a calamity.

1. I first learnt of “The Wave” analogy in the early 1980s at workshops run by Filip Fanchette from the Paris-based INODEP (Ecumenical Institute for the Development of Peoples).
Posted by bruce meder at 08:42